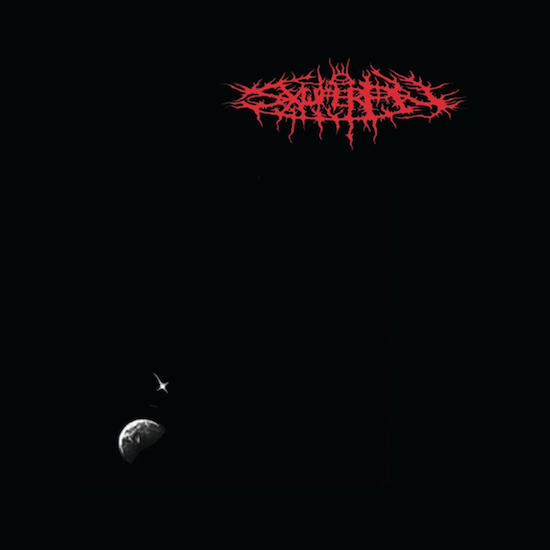 Further extending his reach into the space of everything an nothing, Lord Sxuperion's (Matthew) next installment arrives roughly one year later following the summit of Endless Spiritual Embodiment. Since Cosmic Void's opening in 2016, it has been full throttle into the realm of confusion, a journey through the extremes of the mind and the galactic ethereal forces that have existed since the idea of conception. His turbulent, electronic, maze-like form of cavernous death metal with a pinch a of melody and rhythm continues to stretch deeper into a void splayed apart by existential horrors mingling with cosmic dread. Omniscient Pulse puts into motion the barque to traverse a place of ongoing conflict, birthing both the wondrous and dangerous.

The generator is immediately activated with 'Owl', ignited in the furthest distance via the crashing brilliance of Matthew's light-swallowing growls and intoxicating opening riffs. Untamed and set to roam the outer reaches of space, his drumming then combusts and in the most flamboyant of ways, the organic module of Sxuperion is reactivated. All this remains in perpetual motion and transition to an entry as colossal as 'Death (Bussard Ramjet Malfunction)'. Matthew's vocals stretch from those of an omnipotent force to those of indecipherable and almost psychologically disturbed verbal clatter. Judging from the title of the song, it would make sense something this sudden transpire as a mechanism used to project the feeling of compromised engineering (that of life).

To aid this next step towards the seemingly unreachable, the simplistic yet artistically genius depiction as the cover manages to perfectly capture the idea of insignificance through its emphasis on scale. We often speak of how well a band or project can represent or give account of the immeasurable cosmos or the abyssal, but only few truly understand how to achieve this effect, not just through the music created but also the imagery surrounding it. You'd envision the image while hearing a song like 'Planet Crusher - Defeating the Holy Emperor' and begin to understand how well executed the less is more approach is on Omniscient Pulse. Sacrificing visual glamour for something humble, all the while loudly vocal about the cosmic immensity which dwarfs and makes meaningless one's existence, comes as a praiseworthy facet of Sxuperion's compositions.

The music on Omniscient Pulse compared to that of past albums is of a slightly more technical, more sophisticated architecture. The drumming specifically undergoes multiple tempo and rhythmic changes throughout the record to align itself with the tonality of the guitars, vocals and ambiance. 'Death (Bussard Ramjet Malfunction)' executes this with awe; a sublime emergence of frequencies would intertwine with the turbulent all the while acrobatic drumming. However, not at the expense of the dictatorial climate expressed through Matthew's vocals as they remain the dominant asset with songs like 'Planet Crusher - Defeating the Holy Emperor', 'Betrothed Catacombs' and 'Myopian Frequency Release' emphasizing its omnipresence. The potential held within the music to expand is capitalized on and exploited in-so taking the record through a series of steadily climaxing moments until its pinnacle is met. This is the bread and butter of a Sxuperion album (the way I see it), being able to mobilize the instrumental mote of a song constantly growing in mass, to then explode in grandeur before the listener/s ears is a thing to anticipate with highest of expectations. A Sxuperion does not fail here.

I do miss the Gregorian chanting heard on Cosmic Void provided they added yet another ominous texture in conjunction with Matthew's hulking vocals; however, the samples taken from select films did appear to compensate for this missing feature due to how much more effective they were implemented, causing them to sound very much integral and as extensions of the songs. The production still maintains an organic approach that again acts in unity with Lord Sxuperion's (Matthew) trigger-less drumming. And as referenced earlier, there is much more to his vocal delivery with the addition of almost clinical, impulsive, vocal outbursts, a frenzied display of yells as though trying to free oneself from torment or frustratingly attempting to rectify something irreparable. Altogether, Omniscient Pulse is another strong addition to Sxuperion's interstellar catalog of primordial mysteries and horrors. It will be interesting to hear where the project goes from here.