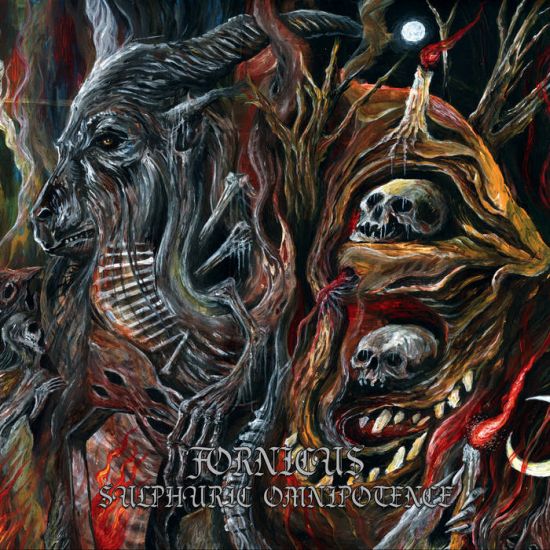 Another freakish mental discharge emanates from the triumphant Fornicus once again agitating the forces of evil on their latest record Sulphuric Omnipotence. At the slightest glance of the artwork it’s understandable why anyone would be intrigued to check out where it leads. Surely it looks like the kind of cover art an Incantation album would have but the gentlemen here conduct themselves in a faster more brutal way than the death/doom masterminds. Fornicus plays black/death metal, but not the linear, one chord structure brand. Instead they apply multiplicity to their hand of destruction and emerge with an album living up to the hype of its picture-perfect gruesomeness.

Seems like only yesterday when I revived the digital promo for this macabre piece but time and the abundance of so many good bands all offering worthwhile metal to sink the teeth into would eventually jumble themselves with this. Luckily, by the sheer chance of thought and note-keeping, Sulphuric Omnipotence can get the attention can get some of my undivided attention.

Placed under the black/death metal microscope, consider Sulphuric Omnipotence a unification of Marduk ("Panzer Division" era) and Incantation that plays out brilliantly. 'Perdition's Guiding Wings' directs the black/death metal onslaught with its chord heavy doom that shoots into a corrosive outburst of blast beats. A venomous combination of snarls manifest on the wings of 2nd wave black metal tremolo riffing that plunges into a death/doom metal black hole. With burning intensity 'Sulphuric Omnipotence' picks up where its predecessor left off; sharp black metal vocals and death growls combine forces amidst a troublesome drumming display and spine rupturing riffs to lay down a menacing attack.

From here it’s all too easy to get behind with songs like 'The Abhorrent Path' and 'Vitriolic Proclamation' offering tunes as sick as their titles. Fast and catchy blast beats in conspiracy with the Eldrich vocal duality and of course, loads of extremely well played guitar riffs. The Incantation parts sparkle on tracks like 'Inexorable Path of Death' and the likes that have a considerably slower demeanor. Everything fits so neatly that it becomes a spectacle; the transitions amongst mid, fast and utterly slow doom sections cannot go without praise hence the sensible and tactile ways in which they are implemented.

'Stormwolves' and 'One Mass Grave' are huge favorites of mine, they're precise, on the money, black/death/war metal militant marksmanship instrumental of the highest degree. Equipped with all the traits of an experienced band these tracks are without guessing the heavy-weight bullets of the demonic 40 caliber shot on Sulphuric Omnipotence. Eradicatingly heavy, yet at the same time excellently assembled in terms of instrumentation; tight musicianship, no sloppiness.

A must own for any fanatic of instrumental extremity and diligence, Sulphuric Omnipotence is within the underground shadow of militant black/death metal, thus a new milestone is accomplished in Fornicus' history.