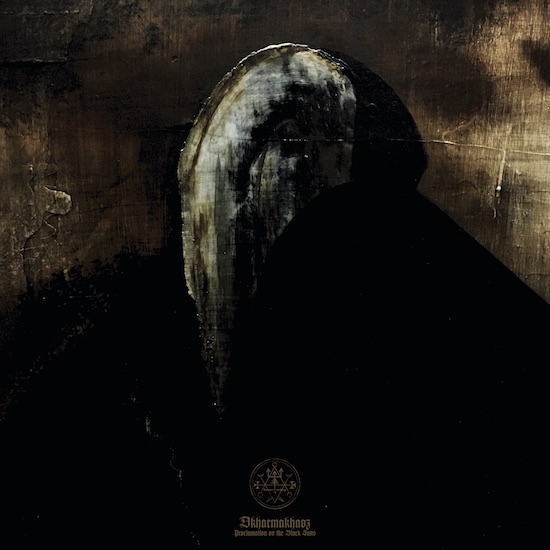 Proclamation ov the Black Suns has a few things to take note of. One (1), the vocals are not the traditional black metal shriek, but a kind of lamenting snarl. So rather than dominating the music, these operate as an addition to the songs. Two (2), speaking of 'songs', the music on Proclamation ov the Black Suns is easy to follow and even predict. Don't let that be a deter, 'predictable' song structures are not always bad especially when the flow is as addicting as it is on this record. You can tell deep consideration was put into composing what we interpret as music on Proclamation ov the Black Suns, hence this succinct piecing together is reflected in the tunes themselves. How many songs can you honestly remember from newly formed, run-of-the-mill black metal bands?, that's right barely any because of how lack-luster, in-genuine and uninspired they sound as they copy and paste till the ink and paper are all used-up. Instead, what you get from Dkharmakhaoz are items that while having individual traits, work together in remaining adhesive to the primary theme, desired effect of the record, all the while having a face of its own. It sounds like its own thing, as though making every respectable effort to break loose from the standardized formula of black metal.

The album has a very meditative state about it. I think the mid-paced tempo maintained from 'The Cycle ov Omega' to 'Reu Nu Pert Em Hru' gives the listener an impression of perpetual hypnotism, a constant state of conscious absence. The album only has 7 tracks totaling 36 minutes or so, however, there are critical moments on Proclamation ov the Black Suns or perhaps erotic highlights, that see the music go from being a tease of sorts to fully undressing and revealing the figure in all its splendor. 'The Cycle ov Omega' is provocative in a sense as it toggles with the blast beats before the groove emerges. The same goes for 'The Way with the Serpent Entwined' (opening riffs here are reminiscent of 'In Blood - Devour this Sanctity' by Belphegor) that goes back and forth between 2nd wave black metal and almost breakdown styled strings and drumming. The adept weaving into something more focused then comes about after the tease as 'Beyond the Transcendental Lumines' takes the center stage proudly moving about with a sensual sway, though possessing a crushing soundscape. Also, to add to the riffing and drumming grove are ambient and industrial sounds in the backdrop that make this song stick-out amidst already memorable entries. This sonic synergy is the muscle on Proclamation ov the Black Suns, slaving for the greater outcome of the record.

The drumming is handled with much care and is very energetic with some of its best moments appearing on title track 'Proclamation ov the Black Suns' (sounds inspired by Dark Funeral). Chord progressions combine smoothly with the tremolo picking that arrive as aid to the buzzing feed of the bass in the backdrop on 'Chthonic Rites ov Fertility', being another steal for the drumming along with 'Ascension' that just obliterates the kit.