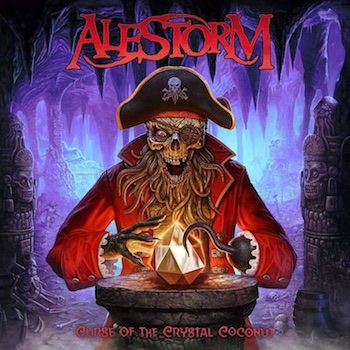 Despite not having listened to every Alestorm studio release (or at least with close attention), I consider myself as a follower of their music and career. I have in mind albums like Black Sails at Midnight (an inconsistent album with some great and other awful songs) and Sunset of the Golden Age (which is, to my eyes, the best album of the band so far), and I have always liked the combination of folk elements with the typical melodies and songwriting of power metal, which gave that particular pirate-inspired style to the band.

Curse of the Crystal Coconut (a strange and kind of stupid name) is the first album that I listen to from the band since Sunset... I totally ignored No Grave But the Sea mainly because of singles like 'Mexico' and 'Fucked with an Anchor'. The first one was AWFUL and the second one was nothing special, so I was afraid I'd lose my time listening to an inferior release to its previous album. In addition, I could notice that the band started to manage a more immature and less serious approach within their music. Such things made me believe that the band's career would start deteriorating, but after listening to this album, I admit that I was (kind of) wrong.

I enjoyed  this album a lot. The songs are pretty catchy as there are really good melodies that are easily memorable. When I realized, I was whistling or humming the melodies of several songs (in particular the singles of the album [except 'Tortuga'; we'll talk about that song later]). In this sense, the songs feel more oriented to power metal, and as a fan of the genre, I found this aspect great.

Another thing to highlight are the keyboards. The sound of trumpets and flutes adds more epicity to this album and enriches several songs to make them more complete and gripping. 'Zombies Ate my Pirate Ship' and 'Wooden Leg Part Two' are the most remarkable songs in this aspect. The keyboard makes these songs more epic and can delight to more than one listener. Check this while listening to these songs.

This album gambles with numerous types of voice and each one is collocated in the precise moment to make it more effective. Christopher Bowes's voice rough tone sounds very characteristic of a pirate, which is one of the aspects that give more personality to the band. However, I want to stand out the participation of Gareth Murdock at the growls and his guttural voice. He's not a top-notch death metal singer, but the moments when he sings are the most savage ones, and this is a success. The choirs, which are sung by all the band, are perfect to sing along the band, and this will be something great to sing along at the concerts. There's even a little participation of female vocals in 'Zombies Ate my Pirate Ship', which adds more points to this song.

Despite having enjoyed a lot of the album, I have to say that it's not a musical marvel nor a masterpiece. It's enjoyable, catchy and perfect to party, but it's not anything that you will want to buy in a physical format and keep it as a great oeuvre, and here is the reason why I think that.

Most of the songs are very formulaic. Many songs start with a catchy melody that after two chorus repetitions, the melody is just repeated with a different keyboard sound, which feels redundant and devoid of imagination to write a different thing. This is the same formula that uses their "classic" songs like 'Keelhauled' and 'Drink!', and I think the band is abusing of this structure when writing their songs.

There are 4 songs that quit shine to the album as a whole. 'Tortuga' is a strange experiment that despite not being necessarily a bad song (you have to be kind of open-minded to be able to enjoy it), it breaks the rhythm that the album has. I see potential, but the song just remains as an odd curiosity. 'Pirate's Scorn' and 'Shit Boat' are pretty boring and flat. You can skip these songs and it would not affect your experience listening to the album. 'Henry Martin' is an inconsequential song and it would have been better if the album had finished with 'Wooden Leg Paet Two', as this one just demerits mere the album as well as the previous songs, you won't miss anything special if you don't listen to it.

For me, the best song from the album is 'Wooden Leg Part Two'. It has a great variety of sections and elements as blast beats, tremolo picking, 8-bit sounds and the final part (reminiscent to the first part of this "saga") that make it intense the most complete song.

The lyrics are another topic that everyone will have an opinion about. I don't have any problem with a more childish approach as long as the music is good, but if you take into account them to enjoy a good record, this particular aspect may be unpleasant.

To conclude, Alestorm has done better things. This album is like eating chewing gum; you will enjoy it or a while, but after that, you will want to try something better. I still consider Sunset of the Golden Age as their best album. Most of the songs here are just good, but nothing really outstanding. Hope they regain the greatness they once had.