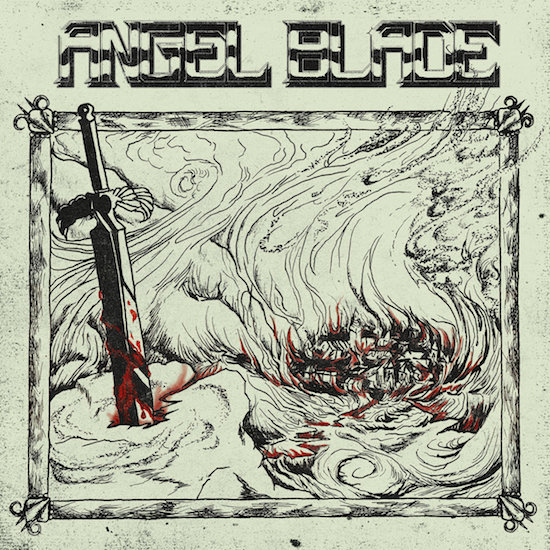 Can't stop listening to this split between Venator and Angel Blade, could not have asked for a better effort from these two heavy metal bands. Venator rocks the shores of Austria whilst Angel Blade cuts through the German fields. Each of them offers 3 songs and I kid you not, both band’s sound as though they're here to do a lot more than just play heavy metal, they're hunting for heads. Big players within the genre are put on early notice.

Venator kicks off proceedings with 'Paradiser', and let me say it now, it’s one of the best heavy metal songs I've heard in perhaps the last decade or so. You get visions of someone warming up for a fistfight or something of the sort, so Rocky fans, you definitely need this in your record collection. The production to the song itself reeks of an early 80s charm and Venator scores high where the quality is concerned. The sharp production captures the passion behind the vocals sung with utmost reverence for the era and the riff work behind the catchy chorus will make it near impossible to move on to the next entry. I can’t quite put my finger on it but the vocalist performing on this song sounds like a mix of Rob Halford and another prominent singer of the same era, damn I just can't pick it out. Nevertheless, you get my point, the singing here is remarkable and is the main highlight of the music on Venator's side of the split.

Heading onto 'Blind Ambition' you get more of that riffing and vocal goodness coming from Austrians. Simply structured, but catchy as hell, it'd have you snapping your fingers, head banging and tapping to the beat. 'Creatures of the Sea' is yet another rocking jam, equipped with beastly singing, strong riffing and punchy drumming. All 3 songs play off the strengths of each other whilst managing to maintain a steady progression, climaxing towards the end.

Angel Blade seem to take things a bit further back than the 80s on their half of the split. Sending waves of mid 70s mesmerism with their analog-esque production and their tunes. Another strong vocalist here, serving up dopamine shots of effective mid ranged singing accentuated with either melodic stretches of vocal highs or lows. From 'Rocking Nights' to the self-titled 'Angel Blade', you get the vision of what this German lineup aims to do and why you should be excited for Angel Blade. 'Blast From the Past' could not have been a more accurate title, it really does feel like you've been cannoned to the mid/late 70s. Sassy riffing catapult at you, while organic heavy metal vocals soar high and land atop contented drumming that plays-around a bit on the cymbals. Angel Blade has their sound down to a T, and the final self-titled track enforces that.

As to how there's not more mention of Venator and Angel Blade is beyond me; however, I think that will change soon enough. If there's a full-length album to succeed this split (that has a similar or the same production respectfully) between the two steel wielders of old then you'd better put aside some funds..... For now, be humble with the vinyl and digital versions available through Dying Victims Productions.