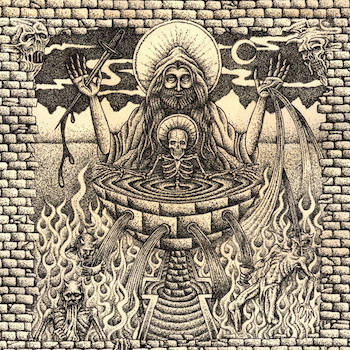 If you would describe yourself as a non-conformist and are one of the people who aren't allowed to enter your local church, this may be the ideal release for you.

Raw music must possess certain qualities such as atmosphere or at least memorable riffs in order to entertain our mammal brains in the process of listening. The most positive characteristic feature of this album is certainly the groovy, punky vibe that should evoke a vision of an early Obituary album performed while the band is on cocaine. Honestly, there are not many unique features to be found here; the riffs are fast, when stripped down it becomes obvious that they are certainly no masterpiece of technicality and the raw sound kinda kills anything that could have been something more. Nonetheless, the energy is still here and very captivating for sure.

The greater part concerning the instruments can be summarized simply; raw, fast, and nasty. Yet the aforementioned groovy parts, which seem to have their roots in crust punk, are one of the things that kept me relatively interested in the whole thing while listening. The atmosphere is pretty consistent and does not fluctuate overly, and if you've been paying attention to the things I mentioned before, you can certainly imagine the ravaging of your ears that these guys have prepared for you. If you have to work with a production of such low quality and play distorted instruments this fast, you are necessarily going to create some sort of atmosphere. In the case of this sympathetic record, it is neither melancholic or mysterious, but it is pure f***ing anger and aggression. Should you be capable to read the title of this EP by now you should have realized which entity is meant to be subjected to this sheer unholy fury.

Another interesting thing is that these guys seemingly invested a lot of effort to sound as primitive as possible, going straight back to the roots of extreme metal. If such a thing would have been released thirty years ago, it would have made sense and a path to progression and musical evolution would still have been open. Primarily, this EP has a sound that would fit the earliest acts of the death metal scene; several riffs sound like a rawer and more aggressive version of early Obituary and Malevolent Creation riffs, which is surprisingly pleasant to hear, but nothing new.

Whether you should get this EP or at least check out is a bit complicated. In terms of what they limited themselves to, they got out the most of what they could. The energy, atmosphere and the rhythm are absolutely a thrilling experience, but I ended up feeling guilty for liking this so much. It is morally questionable whether you should actually support musical devolution no matter how much fun it is, although it is hard to imagine that the guys from the band expected this to result in something big. The whole EP simply felt mindless, there was nothing new and for the most part, it was just trying too hard not to be accessible and to keep posers away.

To conclude, unless you are just curious about what kind of sound these guys just produced or need entertainment for the upcoming twelve minutes, I've got to say that there are better ways to spend your time than listening to this album.