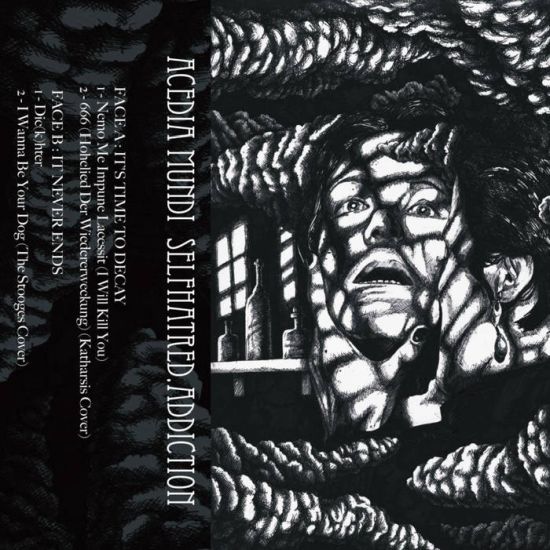 Many metalheads into black metal has sang the praises of the French black metal scene (for better and for worse in some specific cases) and the past decade or so has seen a recent trend of black metal bands out of France that became very noteworthy for leaning into more Avant-garde and experimental territory with their music, wherein they push the extremity of black metal into fascinating new depths, and today we have an EP from a fairly new outfit out of Paris known as Acedia Mundi.

The band first became known in 2017 for their debut album Speculum Humanae Salvationis, where they displayed a very interesting style of black metal which can definitely be seen as part of the current trend of French experimental black metal bands, however their music was much more raw and aggressive in a similar vein to straightforward black metal, but with a noticeable layer of complexity and a clear influence from hardcore punk music. On this EP the band continues and even expands on what they themselves describe as "urban black metal" and really emphasizing their punk influence. It’s important to note that since this release is an EP, the overall experience is brief, as such there's just so much to discuss here, especially considering the fact that 2 of the songs are covers, but while this album is essentially a teaser, a small appetizer between courses (the band has confirmed that they're working on their next album which will come out in 2021), Acedia Mundi does not waste a single split second of the under 20 minute runtime.

As I mentioned, Acedia Mundi's style of black metal is very dissonant and leans heavily on hardcore punk, and in the 2 original songs, this is very evident. From the get go you're assaulted with a wall of sound that's oddly complex in its execution. This is where the band shows their experimental side which is bolstered by the string work and that's where all the influence from punk shines, but what keeps it within the realm of black metal are the anguished shrieks of vocalist Quentin Verdier and the drumming of Angus Schieber. The band display all that chaotic complexity throughout all 4 songs, and are also able to apply their style of music to cover Katharsis' "666" and more impressively, proto-punk legends The Stooges' "I Wanna be your Dog", which if it were on lesser hands it would come off as horribly as, say Five Finger Death Punch covering The Offspring, but thankfully that isn't the case, as Acedia Mundi has both the musical chops and conviction to pull off such a feat.

In a previous review of the split Norwegian black metal bands Taake and Whoredom Rife, I mentioned how much punk and goth music both inspired black metal and are also a perfect fit for the genre to experiment with, and Acedia Mundi proves this in spades. If this EP is a taste for what the band's sophomore record will be, then we would all do well in keeping our eyes and ears on this Parisian urban black metal band, for they have just began to show their potential.