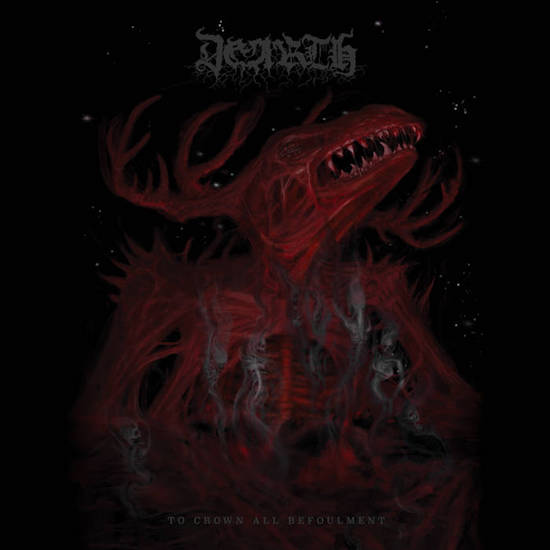 Bands such as Dearth are one of the reasons why you should embrace hope in an improvement of our musical environment in the near future. This is a charming and straightforward musical ensemble, capable of creating an incredibly dirty and raw sound full of utter anger and refined by the very vision of the band members. Dearth seems to be defined by nihilistic ideas, of which I admit I am not the biggest supporter, but even I have to say that the level of successful projection of this thought has certainly impressed me and can be recognized in fact by the impact of the music alone without having to look at the lyric sheet.

I can't say anything negative about this album, except that it sounds like shit, but it's still in the black metal way; so, the pile of shit, when driven by misanthropic ideas, somehow results in a real musical masterpiece.

Everything about this album is simply raw and has a fairly simple sound, however, I would refrain from describing it as primitive as the music seems to have several very fitting layers. The riffs are often quite fast, noisy, and absolutely devoid of any beauty that would normally have been expressed through melodies of any kind. One of the most recognizable characteristics of this album is the atmosphere, the dominant faster tempos give the whole an unforgettable dark tone that shows the blackened side of the band with the intensity of death metal. The completely slow tempos occur from time to time and somehow the guitarists managed to execute the transitions from the faster ones quite elegantly and most surprisingly, achieve the same dreadful atmosphere in a completely different tempo. Once you press "play", you immediately throw yourself into a dynamic environment that gives you no rest. The seemingly arbitrarily chosen high notes that are part of the guitar compositions appear on every track and are completely unexpected; they sound as if they have no purpose at first but they certainly keep you from falling into a trance and therefore you have no choice but to expose yourself to the terrifying atmosphere. To conclude, the guitars are more or less the pinnacle for this style of music.

The drums on this album bring nothing new, but the sheer sound and endless endurance of Justin Divver offer a very nice product in the end. There are many similarities to the older, more primitive style of black metal drumming found here, however, Justin delivers a dose of technical mastery without the intention to complicate too much. Some beats I would rather expect on a direct death metal release with Immolation probably being the best comparison here. Overall, their blast beats and a general sense of rhythm adjusted to the prevailing atmosphere are just what this nihilistic piece of art needed.

Speaking of nihilism... Not that we are lucky enough to live in an era where this band has one extraordinary vocalist, but two, shouting out their nihilistic convictions in a combination of deep growls and very, very, very pleasant high-pitched shrieks. Distinguishing the words is an impossible task without the lyric sheet, but honestly, it's not necessary; the atmosphere, the album cover, and the sound of the vocalists' voices already tell you everything you need to know.

I definitely recommend this one, it's really something special even if it doesn't seem so obvious at first. Technical proficiency may be used to create music that we never expected to hear in our lives, but the primitive rawness and atmosphere of this release are executed perfectly and therefore I have nothing more to say that this release is its own domain. This album should not be compared to the giants of extreme metal, it is too different from what you hear every day. Now go and expose yourselves to the sound of a void that has no other intention than to torture you to death.