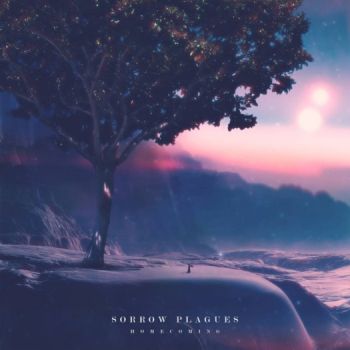 The black metal scene has gone through many transformations in the last decades and has managed to stay relevant in modern days. While new subgenres emerged from the necessity of isolating some bands from the «trve» black metal community, it nevertheless showed that black metal could be interwoven and be adapted to different styles of music. This became ever more prevalent in the early 2010s when shoegaze and post-rock became a major source of inspiration for many black metal bands. The genre kept its very introspective nature but rather than exploring negative emotions, the genre opened itself to beauty, melancholy, and hope. Sorrow Plague, a one-man UK band led by David Lovejoy, could certainly be described as a post-black metal band evolving within this framework. His second album, Homecoming, is nothing short of beautiful and is the best representation of what an uplifting and atmospheric black metal album should look like.

To start off, the album is clearly founded in black metal as both the vocals and the guitar work exhibit characteristics that are specific to the genre. In fact, the vocals have the harshness and raspiness attributed to black metal, but also display qualities that are innate to the shoegaze subgenre where the vocals are mixed with a great amount of reverberation giving the impression the vocals are far off in the background. In these regards, vocals are considered not so much as an instrument but more so as a force amplifier, making heavy section feel heavier and atmospheric section feel more energetic. Another consequence of this vocal mixing is the emphasis on the instrumentation and atmosphere.

Tremolo picking is prevalent in the guitar works which is another indication of the black metal foundations of this record. The orchestration of the album makes it, so the tremolo picking is always followed by background chords which creates this feeling of grandiosity and beauty. However, what truly sets the guitar work apart is David’s ability to compose clean and uplifting guitar solos and riffs through an otherwise dense atmosphere. While the solos are less of a centerstage in Homecoming as they were in Sorrow Plagues’ first full length album, they still have the same resounding impact. A great example would be the first song 'Departure' that starts off with a beautiful solo and sets the stage for the rest of the song.

While it is easy to identify and describe the first song, it’s much harder to do so with the other tracks as the record naturally ebbs and flows into its different sections. The atmosphere and feelings of beauty and awe are consistent throughout the record without being repetitive, making the album very immersive. Most of the songs are composed with a clear post-rock influence with an emphasis on build ups and crescendos.

The standout song of the album is the last track, 'Homecoming', which manages to sneak in a saxophone solo in the middle part. This bold and innovative move goes to show just how much David has mastered the atmosphere and how he can easily adapt his sound to different instruments. The song builds up to its last crescendo which must be the most beautiful of the whole record.

Homecoming is a long journey from start to finish where the buildup are tense and the crescendo release such beauty and awe, almost as if you would finish climbing a mountain and be looking at the horizon. The exhausting and most importantly the satisfying feeling the album provides its listener once going through the whole record is what distinguishes Sorrow Plagues from any other atmospheric black metal project. There is something deeply entrancing and spiritual about this album and for that reason, I would recommend this album to everyone and anyone.