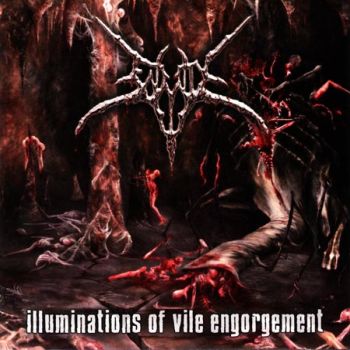 I'm kinda stuck at giving this album a rating number. I wanna give it a number higher than 90, but I don't know which one to choose? Whatever. I think a 9.3 will do. I want to give this a 9.5 as well but it feels like too much. Shit, whatever. I kinda wanna rate this lower as well, but like.... I can't, because I like this. Lol. This album is good and bad at the same time. The good is the instrumentals, the bad is the vocals and the way the guitar is played. Although flawed, I still dig this.

This album is definitely some of the nastiest shit ever, it literally sounds like a rumbly stomach if it was a person talking, for example. The guitars for sure have their own sound, and a slightly different sound that we don't exactly hear that often in brutal death metal. It's down tuned and sounds rusty, stale, scratchy, and bloated. It's a good ass guitar sound for sure, it's pretty damn heavy and truly does create a nasty atmosphere, like a room full of dismembered rotting corpses with feces everywhere. The guitar is both great as fuck and flawed. Has an amazing and ideal sound, but the songwriting, (specifically the guitar parts) is just randomly scattered playing for the most part. Most of the guitar on the album are just super-fast chugs following the snare blasts, followed by some light wankery and pattern changes in the riffing, and that's pretty much how it is for the entirety of the album. Obviously it's bad and is a giant clusterfuck, but I like it? It's something you'll notice for forever, but you'll also seem to fall for it and not really give a fuck. It's messy, it's sloppy, there's no brain cells. But I still manage to like it a lot. I've heard people say that "Even noisegrinders won't accept this crap." I mean they may be right, but this album is truly reminiscent of goregrind/noise(grind) if you will. This record is pretty much just goregrind played in the style of brutal death metal, with fewer brain cells.

The drums aren't bad at all, the drummer is a damn great drummer that's super consistent with blast beats, double kick, fills, and everything else. And the drums have magnificent sound. The snare is clanky yet refined and the double kicks sound like someone tapping a hardwood floor with the end of their shoes but put near a microphone and with some bass to it. It's great. Along with the guitars, the drums make this album heavy as balls, musically. I really really really like the drum sound on this album. It's perfect in my opinion, and again; heavy as absolute shit. It's pretty much the most redeeming feature of this album. The only downside of the drums is that there's no variety at all, it's just blast beat after blast beat followed by some quick fills, ride cymbal hits, sudden snare breaks to where it shifts towards cymbal hits, and then more blast beats. The drumming is just blast beats galore. Computerized drums could easily take his place. It's so simplistic yet it's so fulfilling and good as hell. The lack of variety in drums doesn't really bother me. In most brutal death metal, the drums don't have much variety in the first place. Regardless, this album is constantly doing the same few things on purpose. It's meant to constantly and consistently blast beat away, that's just the style of this album. I love the drum sound, I love the consistency and perfection in the blast beats and playing, there's not exactly anything wrong with the drums except for they do the same thing 24/7, but it's not that big of a bother, for me at least.

Now here's the part of the album that actually makes it bad, or makes it a huge chunk of bad, the vocals. Now obviously, I absolutely love and adore nasty brutal disgusting vocals that sound like a nasty toilet bowl, I absolutely love em. But the vocals here actually hurt my head at times. They're excruciating, I just don't understand why they need to sound like this. The vocals sound like a drunk fat man and a pig both simultaneously burping, while 5 glass plates are vigorously being scratched with forks. Now take that and put microphones up to the man and the pig, as well as the plates and combine it. There you go, that's the vocals on Illuminations of Vile Engorgement. I do like how fucking gross and rambunctious they are, but c'mon dude, why does it have to sound like a fucking metallic craphole screaming? There's truly no need for this. I appreciate the effort, but I'd like this album a lot more if the vocals weren't so annoying. Sure, I can jam this entire album with earbuds when I'm in the mood and I don't really pay close attention to the vocals and I tune it out, but you still acknowledge its existence. Again, good effort and display, but my god...why?

Even though this album has its bad side, the good side prevents me entirely from hating it. Like I said previously, ABSOLUTELY LOVE the drum sound and the drumming, it's the best part and aspect of the album, that's a fact. The guitar is low tuned and fucking heavy and gives off a stale, deep, repugnant feel. I just love it so much. Great sounding drums with consistent playing and blasting, along with a low-tuned ball-dropping guitar tone. I'd probably hate this if the drums and guitar sounded any different from the way that they do. I can't forget about the cover art as well. I really like the artwork, ALOT. It's gorey, brutal, and it's just so great. The music definitely fits perfectly with the cover, that's for sure. Definitely one of my favorite albums covers of all time. FUCKING LOVE IT. 10/10 cover.