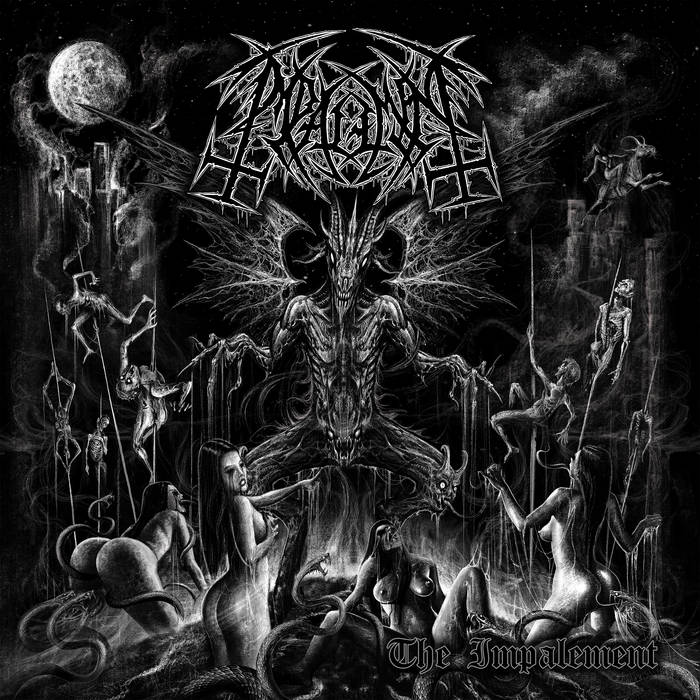 Buy on: Bandcamp
Type: Full-Length
Release Date: April 30th, 2020
Label: Self Released
Genre: Black, Death
1 The Impalement
2 The Tombs Of The Saints
3 Within The Court Of Rats
4 Alma Pater
5 I Am All
6 Satan's Fire In My Eyes
7 Thus Spoke I - Götzendämmerung
MetalBite on YouTube

Once the typical line-up of a band was formed by four or five musicians, but these times are long gone. Today we are confronted with "bands" that consist of a studio drummer and a megalomaniac multi-instrumentalist. This is efficient, but sometimes the results appear rather questionable. Fortunately, Impalement can convince despite their configuration. The driving force behind this name is Beliath, a guy who has bought a lot of units of stored blood on special offer. But that's his private pleasure and so it's time to scrutinize the musical offering.

The Impalement is a very vehement outburst that operates at the hellish interface of black and death metal. Its level of violence is remarkable, the forceful production develops a lot of pressure and each and every of the seven pieces explores the extremes. Worshippers of doom metal get blown away by the high-speed, blast beats compatible sections of the material and black metal purists who need a great portion of atmosphere will not appreciate this work as well. Beliath likes his piece of meat raw, juicy and bloody. The thunderous drums, the extremely vigorous guitars and his pretty barbarous vocals create a musical conflagration and there is not much that does not fall victim to the flames. Due to the permanent full-speed-ahead-modus, the album is at risk to sound too uniform, but the noticeable maturity of the compositions ensures that the output does not lose its thrill. Moreover, despite the very homogeneous configurations of the single songs, Beliath has successfully integrated some elements that stand out right from the beginning. Especially the riffs of 'The Tombs of the Saints' and 'Alma Pater' leave their mark immediately, but the machine gun guitars that occur occasionally in 'I Am All' also haven an enormous impact.

Of course, there have been thousands of bands before that have presented their vision of the soundtrack to the Apocalypse. The Impalement does not sail to new coasts, but it shows the essence of pure violence in an uncompromising and formidable way. By the way, "pure violence" does not mean chaos. Even when it comes to some furious solos, Beliath has everything under control. Neither the breaks nor the tempo shifts create incomprehensible song patterns. This ferocious debut does not expose all of its strengths and features immediately, but it is also definitely not inaccessible. Labyrinthine, progressive or experimental song structures do not show up. The songs are simply intelligently constructed, neither boring nor victim of their creator's ambitions.

The Impalement is free from any kind of major flaws and black metal and death metal meet each other on an equal footing. The album is more vehement than the last Necrophobic release, but its melodies are slightly weaker than those of the Swedish legend. Be that as it may, the seven songs constitute a very good start and catapult Switzerland with its rather small scene on my metallic radar again. Hopefully Beliath's creativity is not sprayed as fast as his hectolitres of fake blood.