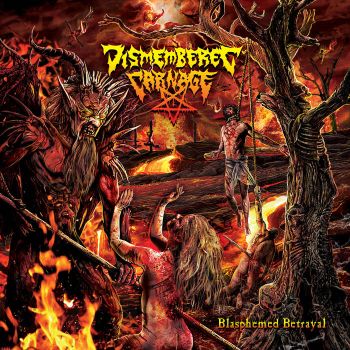 It is very obvious that Dismembered Carnage drinks directly from the unholy fountain of Mr. Benton and company. 'As Jesus Burns' emulates riffs, grooves and more than everything the infamous layered vocals where gutturals meet harsh to increase the blasphemous feeling. 'Denial of Christ' reminds the very best moments of "Serpents Of The Light" and "Legion", guitar passages that deserve some attention from the listener. 'Pastor of Disease' is another example of the evident source of inspiration for Dismembered Carnage, even the guitar tone is comparable to the one of the Hoffman brothers’ bests. In general, the band is always in an attack pose, however, something caught my attention in songs like 'Your Lord Dismembered', 'The Unholy Crucifixion' and 'Devour in the Tomb'. In the tracks previously mentioned, the band engraves their personal style. A mid-tempo groovy feeling that spices up the experience and wash away a little bit the Deicide taste in my mouth. In my opinion, the songs are well written, most of them loyal to the most brutal and sacrilegious style of death metal. Concept wise, the record gravitates around blasphemy and profane topics that by now are cliché in the genre. For instance, 'Rape the Priest', a classic no brainer track title to take the easy way into composing a death metal song.

Nonetheless, the band does not fall short in brutality, the fact that they homage a highly iconic band does not mean we are witnessing the worst of the worst here. As I said before, songs are well written and in general the album manages to entertain and bring good memories from glorious moments of death metal. I will also give some extra points for the front cover that doesn't disappoint any headbanger and metal freak, an apocalyptic landscape at its best.

Final words, Blasphemed Betrayal by Dismembered Carnage is a brutal copycat in the good sense of the expression no offense to the band or fans, I just want to point out the obvious references that come to light. Trick or betrayed!!