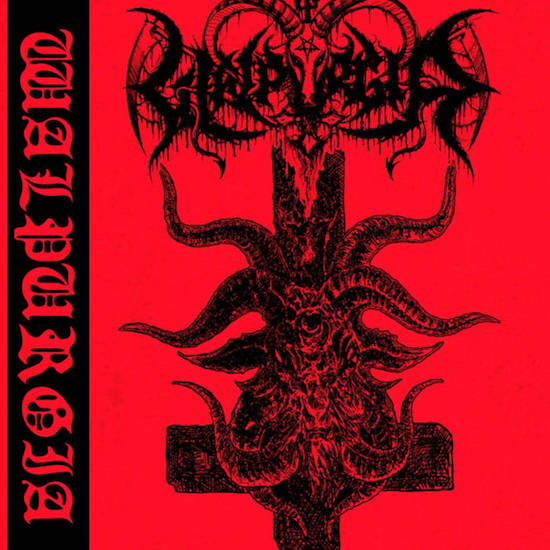 I had no clue this was in the works! Walpurgia a new war metal committee is formed by members that have played in Disharmony, Hate Manifesto, Black Blood Invocation and Kawir; hence if you're familiar with any of those bands, by default you should want Altar of the Goatbaphomet on CD and 12' Vinyl released through Helter Skelter and Regain Records.

It had only been recently Black Blood Invocation performed a ritual alongside death metal masters Imprecation (USA) titled "Diabolical Flames of the Ascended Dead", which spawned many praises by those of whom made contact with it. We also witnessed Kawir put their pagan black metal steel to flesh with their milestone and monolith of an album "Αδράστεια (Adrásteia)". Now, without warning, members involved in both bands (among other diabolical practices) unleash a face smashing, hammer of desecration through their debut demo Altar of the Goatbaphomet. Focused on the beefy mid-paced side of the war metal spectrum, Walpurgia deliver 5 tracks reflective of their hatred for the right-hand path. If you've ever had encounters with Wargoat (Greece), Necrobode or even some of Archgoat ("Light of Phosphorus", etc.), you'd agree that this demo fits superbly within that category of the genre. It's got the licks, the punch and the vibrancy to summon repeated listens. With badass track titles like 'Altar of the Goatbaphomet', 'Anomalistic Orgies of the Mephistophel' and 'Sadistic Recrucifixion', equipped with the music to drive home the feelings connected with those names, you won't want the session to meet an end.

All contributions are up to standard with what is commonly accepted within war metal; from the artwork to the malicious vocals, stoning drums and restless guitar-work, Walpurgia immediately secures a position in the desecrated soil of the underground war metal scene among the rising privileged. You'd be lucky if the vinyl and cd have not sold out as yet. A must have for black/death metal warmongers.