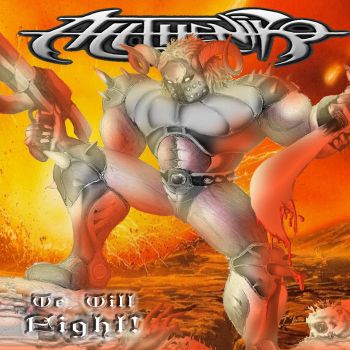 Originally released in 2007 then repressed by Careless Records in 2019, a modern classic of sorts, unknown to many (including myself) until now. We Will Fight! by Italian power/speed metal band Alltheniko is a go-round, a rotation of heavy metal eras and branches. Despite the power/speed metal tag, We Will Fight! has a lot more going for it than that, which in this case could either make or break the record. Some listeners like consistency, others like solid tunes and others like a bit of both.

What We Will Fight! offers leans more on the side that attempts to please everyone as far as the involvement of the genres are concerned. It has power, thrash, epic, black/speed ('Dead Brain (Extermination)') and even an attempt at death metal growls on the same song. In addressing the matter of consistency first and foremost, you won’t get that. The genre tag of this band is true to an extent, and Alltheniko make certain to represent it on tracks like the opener 'Thrash All Round' and 'Sound of Rust' seemingly influenced by Overkill. Then to insert the power metal via the melodic piece you could hear on the latter, sounds of a convincing and well put-together song. Not forgetting the guitar solos on both, they slay and provide some incentive for the listener to stick-around till the end.

As mentioned earlier, other styles commingle with the set intentions of We Will Fight! that is primarily a power/speed metal record. The epic power metal vibe of 'Sufferman' and 'Coming Soon' would cause any listener to re-investigate the band given how smooth they are put together as representations of epic power metal. Hence, the album at times instead of feeling instrumentally linear, bounces around from power to thrash to epic and the incorporation of all three sub-genres such as on 'The Silent Priest' does not make the task of labeling easy on occasions.

Cast aside genre-adhesion, and what you would end up with is a pretty decent collection of songs attired in an attractive array of fabrics. Some of the best tunes on We Will Fight! strike viciously in the form of 'Sufferman', 'Coming Soon', 'Alltheniko "We Will Fight!' and 'Criminal Mind' that compensate for the lack of focus on any particular playing method. The rhythm and melody Alltheniko are able to extract are mesmerizing and really make it easy listening to the album in its entirety. The vocals are cool too, its thrash metal themed mostly so it has a sort of shabby edge to it that works with the contrasting sung chants and surprisingly favorable clean singing aiding the power metal segments heard on a song like 'Sufferman' etc.

All in all, there's a fair amount of replay-value and if you could excuse the somewhat underwhelming production and amateurish organization then, We Will Fight! has some reward for you.