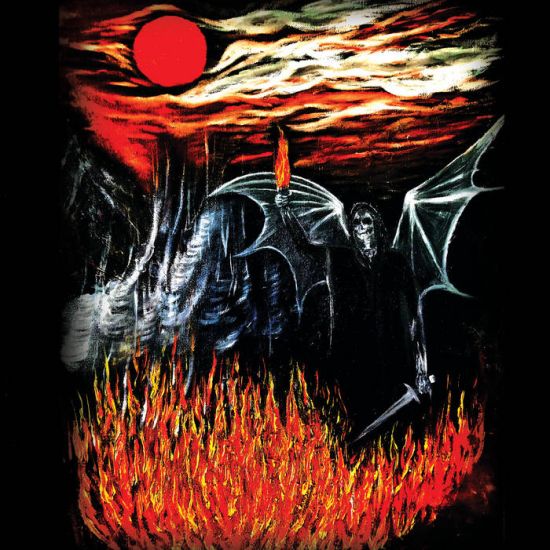 What a way to make an entry, storming in from Belarus with the muddiest of shoes, skips over the carpet and into the arena of fatalities, Ljosazabojstwa translated to 'Murder of Fate' arrive with knife in hand to disembowel the crap acts from the genre known as death metal. This is the band's first full length album that comes after a slew of EPs and a demo, all of which seem to be holding considerable weight in the undercurrents of things. Głoryja Śmierci is at the scene of the crime and what can be said but guilty as fuck. Out there in handcuffs with a smirk on the face and an alibi that just doesn't add up; the attempt at covering its tracks after such an onslaught within the medium has shot the band into the limelight of carefully monitored offenders.

Głoryja Śmierci is a sick as fuck death metal album, absolutely crushing!! From the loud pompous vocals, maniacal riffing and walloping drums, to the sheer creative genius of the songs, it's easy to hear why they have stirred up such a buzz in Belarus and beyond the country's borders. Brilliance, this record sounds like the band could not decide whether to go all out and take a mighty puking on the landscape or pile-drive the shit out of its inhabitants; yea these guys are lost somewhere between anger and disgust.

Głoryja Śmierci arrives with 5 tracks, a combined total of 45 minutes, so it’s no guessing if Ljosazabojstwa are confident in their efforts to write long interesting songs, plus they go by damn fast. They're listed as black/death metal but that does not mean they conform entirely to it. Their music is equipped with many textures causing the record to diverge ever so often into new territories relevant to the sub-genre but with a bit more commitment and focus on any given style. This is where the band truly excels, being able to stick to the primary formula of death metal vocals, mixed in with some black and death metal riffing and chord structures all the while planting their knives in the stomach of other genres through which they fluently traverse about.

If you are like me and felt a bit skeptical given the long track lengths without any mention of doom metal anywhere, then I can assure you that the very first track 'Pachawalnyja Śpiewy' will turn your reluctance into a cry for more. Following the thrashing entry, puncturing vocals take command and its lights out from there. Whoever handled the guitars on this track amidst others, must have been daydreaming about 1994 because that solo sounds heavily inspired by Gorement's "The Ending Quest". Very old-school in its round-about, but still having enough of a modern texture to the songs.

There are moments in which doom metal creeps in with some haunting organs after surveying the landscape and begins to dig-up and really open the music. Thus, it be said, though being a diverse effort, Głoryja Śmierci projects clearly where the music is heading, therefore rarely having any times where you sit and feel lost or tired.

'Zorka Pałyn' is another marvelous song that focuses a lot on the flow of the music. Groovier than its predecessor yet still very hostile and impulsive thanks to those authoritative vocals laid down by whoever. Sorry but I have absolutely no information with regards to the identities of the members involved in the band beside a promo picture. But personally, I don't care if they reveal themselves or not, just as long as they keep producing the good tunes.

Ljosazabojstwa seems to really like the organs and they appear once again on perhaps my favorite track off the album, 'Imia Mnie - Liehijon'. It has the eeriest feeling and best guitar solo on the album plus a bit of laughter as though this is but a mere walk-in-the-park for the band. It must be added that the band's usage of thrash metal on 'Imia Mnie - Liehijon' is near flawless, given they're able to transition from it in a synoptic way then returns by means of tonal build-up on the song which descends into 2nd wave black metal territory. Every piece neatly falls into place.

I was worried Ljosazabojstwa would not be able to keep the momentum going but they somehow managed to do just that with the final two tracks that competed fiercely with the prior entries in so offering musicianship and song writing decorum just as strong. 'Źniščany Boh' in particular provided a shelter of sorts made-up of the album's best features nurtured and punctuated, taking the album to an up shift in gear that is later supplemented across the finish line by 'Idzi I Hliadzi'.

Głoryja Śmierci more than anything resembles a coherent ode to early 90s death metal that saw bands such as Cadaveric Mass and Asaroth (USA) put out now highly sought-after records. Chances are Głoryja Śmierci could easily fall into that category of obscure goodies with the progression of time.