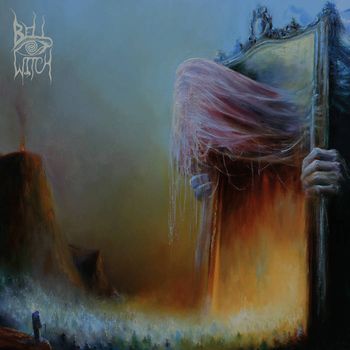 Over the past few weeks my relationship with Bell Witch has spiraled from passing interest to intrigue to utter obsession. I've always been a fan of the slower, more melancholic side of metal, so naturally genres like death and doom metal have become cornerstones in my mental map of the genre. Funeral doom always seemed like it should be right up my alley considering that, but it was always just that little bit too simple with too few elements to connect to for me to really enjoy it. That all changed recently when this album finally made me understand something very important - that's the point. And after that revelation I could truly appreciate the excellent musicianship on display.

There's so many things that make Mirror Reaper great that it becomes hard to catalogue all of them. There are no real buildups or climaxes to speak of, but the composition is incredibly fluid, travelling between agony and ambient acceptance with ease. Despite its monstrous length it manages to be one of the most cohesive albums I've ever listened to, with absolutely no transitions feeling out of place or forced, something I can't even say about my favourite "long-form song" album ("Winter's Gate" by Insomnium). Saying that Mirror Reaper is a musical journey isn't doing it justice. It's a compete emotional odyssey.

Then there's the way an atmosphere is created. It's pretty easy to layer tracks upon tracks of melodies and synth lines to create an expansive sound, but as much as I enjoy listening to that kind of music there's something really special about the simplicity in Bell Witch's approach. One organ, more often than not playing singular, droning notes reminiscent of a funeral dirge, and a bass guitar is all the band needs. The bass usage is astounding - by letting the low notes ring out until they fade the bassist creates a soundscape that feels incredibly full yet empty at the same time. The feeling that something is missing hangs in the spaces between notes, and it's a perfect reflection of grief.

Speaking of grief, know that the album is not an easy listen. It comes from a place of genuine sorrow and pain, with the former drummer Adrian Guerra's death serving as the main inspiration. Mirror Reaper is a memorial to him, complete with an ambient section halfway through featuring unused vocal tracks from his time in Bell Witch. It's probably the most poignant and reflective moment on the song, and for Mirror Reaper that speaks volumes. The soundscape, which at the beginning was formed by pained-sounding power chords has been reduced to little more than a single gently plucked note every few seconds. It's completely ethereal, an effect only added to by the echoing vocal tracks, a voice speaking its poetry from beyond the grave.

The final thing I want to talk about is the non-musical components of the album. Oftentimes I find myself needing a fitting cover to connect the music I'm hearing to and Mirror Reaper delivers with some of the most beautiful cover art I've ever seen. The piece, one of many metal album covers by one Mariusz Lewandowski, matches the tone of the music perfectly in its surreal, dreamlike beauty. The lyrics also fit into the aesthetic Bell Witch are trying to achieve, being abstract enough to not be intrusive but also layered with enough meaning for the keen listener to interpret.

So, overall, Mirror Reaper is a masterpiece that has rightfully attained a cult status in the metal community. It's a cohesive voyage from the deepest recesses of grief to the emptier quietness of acceptance and, whether attentively or in the background of other activities, I recommend every doom metal fan gives it a listen. That's part of the beauty - it works either way.