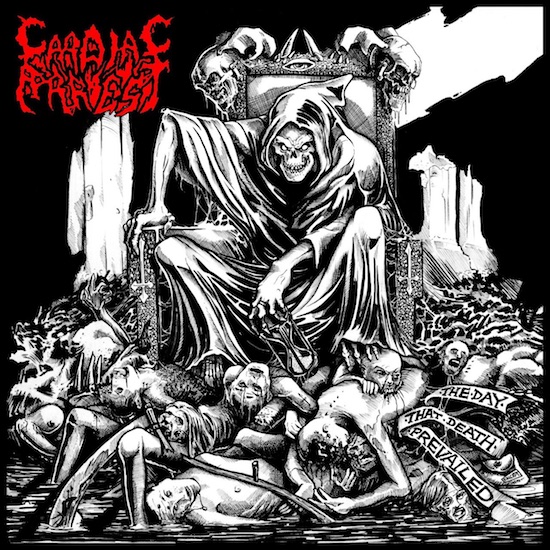 It never ceases to amaze me how Chicago still lies underappreciated in the bowels of the metal underground; yet, here we are, vying for a coveted spot among the favored elite cities that can tout their respective metal representatives with pride. As long as my fingers might find energy to type and my oft-too-verbal mouth might offer accolades to all in my vicinity, I will continue to promote and defend the Chicago contingent.

Cardiac Arrest emerges yet again with a death metal offering that largely separates them from everyone else at this point. Coming by way of Spain's Momento Mori label, the newest offering, The Day That Death Prevailed, is chock full of the familiar riffs of the crunch variety and raw vocals from the lowest recesses of the stomach's acidic cellar. Long-awaited and hotly anticipated, this album will surely satiate and rile up the masses desperately needing a release of late. The cover art, done by local artist-extraordinaire Eric Rot absolutely captures the feelings you're going to find inside this opus. When I was a kid in the 80's it was usually an album's cover art that sold me on a record, and Rot's experience and attention to terrifying detail sets him among the best in the business. His cover art for The Day That Death Prevailed only serves the Cardiac guys well.

Recorded during the COVID-19 pandemic's isolation period, there is a very vivid sense of oppressiveness that is typical in the group's music; the tone is fluid with very “typical” Cardiac Arrest feel throughout all of its tracks, but 'Plague Ridden Destiny', for example, hammers it all home with a massive riff that carries the track towards the apex, which then casually subsides into a slow, doomish climax that more or less defines the current state of things. I'm not sure the guys did this purposely, but it managed to give the current stage of the planet a fitting track to languish within. Plowing right into the next putrid track, 'A Call for Violence', there is no relenting, no need to soften the blows, as the album just forges ahead with all of the subtlety of a violently dusted pit-bull tearing into the meaty part of a muscle-laden forearm, a technique always expected from these guys. The crafty time-changes, melodic riffs (carefully placed in the general sense, but damn well effective) are always present and prevalent in a Cardiac Arrest album, and this offers no quarter and skimps on nothing, proving that there is a certain level of greatness to always be had in a causal repetition of style and craft.

The album taps into the very parlors of your inner torment (known or unknown) using every musical device death metal has to offer. 'Endless Dread' has its slow, almost lancing feel that builds up into what is most assuredly going to be a fast and volatile trip, indicative of its very title. What I always enjoy immensely about Cardiac Arrest is how the songs seem to tell mini terror stories that, while lyrically concise and visual in their own right, are perfectly complimented by just the right amount of instrumental speed, violence, and conclusion when necessary. It's so very easy to get lost in the mire of nuance and overkill when crafting metal music of this caliber, but, skilled authors the quartet are, they seem to have the formula down without falling into lethargic formulaic whirlpools. That alone sets them apart from the rest, and eventually the rest of the metal underground will catch on to this very open secret soon enough.

I've long admired Glenn Danzig's stance on being exceptionally hard on judging a friend's music, and I fall under the same stock in terms of integral indifference. I'm overly-critical of a friend's music, and always will be because there's really no call for passing along phoned-in jargon or simplicity as good music for the sake of camaraderie. That said, Cardiac Arrest simply defines the very essence of death metal and puts in seemingly effortless amounts of creativity and visual horror to create albums of honorable crafting. The Day That Death Prevailed calls upon the mind's ability to process very real and disturbing visages and apply them to even the most unaffected or neutral psyche. Music of any genre is supposed to solicit real emotions and deep feelings (if done well), and if death metal is supposed to provide a carnival-like jaunt into the darker parts of the personal reservoir, then this is, quite frankly, the album for you to enjoy and use as a musical tapestry for such a bleak reflection.