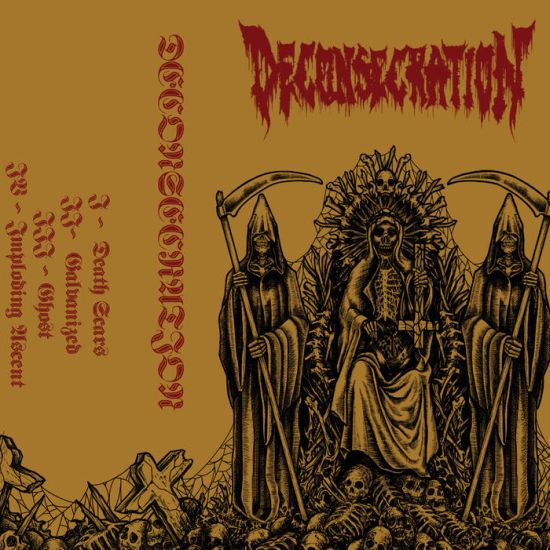 All things once sacred and of reverence are now made into things of putrefying, disgusting and vile properties. A bit on the low-gain side but hinders not that which could be felt through the pummeling drums, grueling vocals and blowtorch guitars+bass combo, the debut demo from Deconsecration is a powder-keg of obscurities and violence catered by 4 simply titled entries.

As though trying to free itself from some sort of immobilizing goo, the album moves about with a sense of agony and growing despair. Some moments tell of sheer energy, while others expel feelings of helplessness and struggle. This demo by Deconsecration is the invocation of desecration. 'Death Scars' embodies death/doom malediction, rich in the minerals of its finest moments enlivened by Asphyx, Gorement and the likes, held in-tact by a sadistic arousal through stimuli being 'Galvanized', traversing back and forth between increasing instrumental mobility and enraged vocal outburst, the musical mangling is all but recoverable.

Just some sick stuff again being served up by Caligari Records, morbid infestations of the mind, body and soul, 'Ghost' and 'Imploding Ascent' show us that Deconsecration are nothing to toy with. Though very destructive and emotionally agitated in nature, the demo practices and implements with satisfying effect a steadfast crescendo of intensity, fortifying its heavy-footed bass and guitar work to match the drowning drums and malformed vocal attire.

Dignified death/doom metal with the propensity to cauterize; pick it up on cassette when it’s made available through Caligari Records, 12th June 2020.