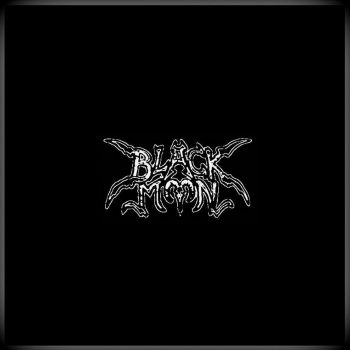 “Don’t judge a book by its cover”, that is a saying to apply reviewing Blackmoon’s self-titled album. I have to confess that when I received this CD, I wasn’t very motivated to spin it due to its minimalistic cover art, which is all black, and its rather amateurish band name design. I think I was judging the band without even giving them an opportunity but when I finally opened it and listened, I changed my mind and I have to give some credit to this Polish band.

The album kicks in with some acoustic arpeggios that lead to a demonic kind of scream that immediately caught my attention, I was like “ok, that’s a good start guys”. Then, the song builds into a melodic tremolo picking madness mixed with a very interesting evocative atmosphere. The song structure and general song writing of Blackmoon is pretty similar not to say repetitive, but it managed to trap me into that cycle of melancholy that the guitars evoke. I’d say the best mood for this music is a rainy and cold quarantine afternoon. The general feeling is sadness but at the same time is melancholic and evocative, not depression but gloom and introspection instead.

The second tune is similar to the first one in the way that it builds from some acoustic guitars and then explodes into a scream that connects the sorrowful and desperate ambience. Again, the guitars do not seem to me exclusively black metal predominant, I rather think they share lots of element from melodic death metal with some sprinkles of a melancholic vibe that are very ad hoc for the band’s concept, darkness and isolation of the human soul. The second song fades into a rain effect and blends with the third song, which is one of my favorites of the record. It was a good transition, well thought out and designed to keep it smooth. To sum up this part of the review, I have to say that the guitars are well executed and are pretty decent for a first recording, making a lot of emphasis in the melodic tremolo that sets the aura for the whole experience.

Something that also caught my ear is how pristine and predominant the bass sounds in the album. For being a “black” metal release, the four strings are really there and make the production more robust and less thin, something annoying for most of raw black metal bands; guitars are so dominant that they sound like mosquitos. Not the case here, the bass is present and helps the band stand out from the mediocre overcrowded scene of clone bands. For instance, the song 'Quintessence of Grimness' displays some killer bass lines that are not very common in black metal bands. Thus, I don't really think Blackmoon is a pure black metal band, I consider they are blending some dark-melodic structures with death metal; creating a desolate and cold landscape. If you want to find a similar sound or rather the fountain from where these guys drink a little; well, you must go to Dissection's second album "Storm of the Light’s Bane" or the fellow country man of Christ Agony. Obviously, keeping some distance in terms of sound, production and execution but in general we can make those sonic references.

The drumming department complies with the requirements of the band filling the different parts with interesting patterns but is not the instrument that blew my mind here. It has its moments to shine here and there in the record but in general is an average performance. The vocalist is also pretty decent and manages to hit the note in his most black metal moments to keep up with the melancholic and grim feeling the band wants to transmit. The lyrics are delivered in a clear way so you can understand what he is singing about. And that leads me to the next point in the agenda, the concept. I think the approach is kind of obvious and repetitive because if you see the track list, there are words that are mentioned several times. To name a few, first track 'Dark Melancholic Black Metal', second one 'Forlorn in the Dark' and third one 'Dark Autumnal Night'. So, can you see that the flow of ideas is kind of repetitive? The word “dark” is mentioned three times in a row, thus, it makes me think that the concepts are kind of shallow and superficial and they need to deepen into the theme in a more poetical way or use a thesaurus.

To wrap up, being a first recording is not that bad, it keeps you entertained and with the right mood and atmosphere is a blast. Blackmoon managed to craft a decent day view full of interesting textures and atmospheres, especially in the six and four strings. This fact makes up for a varied experience and differentiate the band from the label of “black metal”, they can also be classified as melodic-black metal or so. The concept and lyrical approach could also be improved for future releases, exploring other feelings and topics. In general, is not a mediocre album, it is interesting but is not something that is going to constantly spinning in my stereo, I will keep it for those rainy and cold afternoons when melancholy and gloom fills my soul.

Recorded in 2010, it took 9 years for this album to see the light until Narcoleptica Productions released it. I praise this kind of initiatives because they manage to rescue our cultural metal heritage somehow and in this specific case, the music is also very cool. Blackmoon is a Polish band that draws influence from mid-90s black metal (I sense some early Behemoth but without the acoustics and better executed). Raw but with hints of melody, very melancholic and with a proper sounding drum-kit: contusive and aggressive, not the common soft-rock type. This band’s sound is actually a very pure expression of black metal.

Their favorite chord progressions are cold and dismal, very Norwegian BM; the main themes make you feel like you are in a forest at midnight bathing in the light of a full moon. Arrangements are done in a very orchestral way; the bass is not always playing the complete melody from the guitar lines and the two guitars aren’t playing exactly the same always. In some passages we have 3 voices entangled, performing a quite sad dance. Over the strings, the vocalist’s desperate high-pitched black metal shrieks pierce the silence of the night like a dagger through the heart. The guitars’ distortion is as acid and raw as the production of the album, the slightly distorted bass played with a pick anchors the guitars with the double bass drums amazingly.

There are some arrangements were the bass is the principal voice, that are kind of mellow and corny so they fit in the depressive style of the band. The drumming is pretty aggressive and energetic, the tempos are upbeat and the double bass passages were nailed evenly. The breaks were also nicely executed, and the cymbal work is classy and creative. There are some acoustic passages but nothing too experimental, the band never drifts away from the absorbing melancholic atmosphere they build. Excellent composition skills and advanced theory music concepts.

The raw production of the album fits the music and complement the delicate harmonies they use in their melodies, capturing the essence of black metal perfectly. There are some mid-tempo passages were the enthralling leads capture your attention and repeat over and over, but you don’t want them to end. The faster sections show off some of that desperation through the anguish of the harmonic tension, very good stuff... black metal as beautiful as the night.