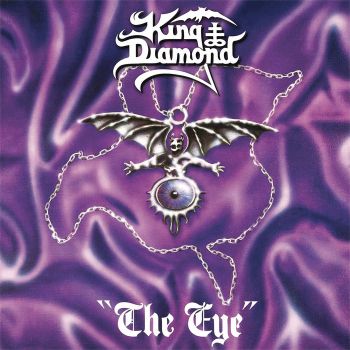 Usually it is not easy to emancipate yourself from your former band and it is getting even more difficult if you give the most characteristic feature of your ex a home in your neck. The first releases of Mercyful Fate had offered ingenious music and King Diamond’s voice was the cherry on the cake. Maybe he wanted to distance himself with the funny first EP? Hardly imaginable that Fate would have ever recorded a track where Donald Duck or Tom and Jerry show up. However, the King became a more and more autonomous brand. Especially the sound of The Eye has nothing in common with the pretty harsh productions of the early Fate recordings. It provides a rather warm sound with occasionally pretty intrusive keyboards. It’s not a bad mix, but also no masterpiece in terms of the technical implementation.

Maybe I am not the right person to review King’s albums, because I was never interested in horror movies. Honestly speaking, his lyrics do not mean much to me. I respect their meticulous elaboration and that’s it. But it is not that easy to “shock” the listener again and again with similar stories. However, from my point of view the lyrics are not the crucial factor when it comes to the evaluation. It’s naturally the music and here I cannot ignore that King offers some decent songs, but real highlights are a rarity. 'Behind These Walls' is one of them, its chamber music-like intro, the smooth flow and the earworm chorus shape a coherent, compact and impressive tune. 'Eye of the Witch', a nice combination of tragedy and heaviness, also marks a climax, even though it is a rather gentle opener. Finally, the stirring guitars and the thundering tom-toms at the beginning of 'Burn' promise a great track, but the comparatively weak chorus pours some cold water on this number. And unfortunately, there are quite faceless songs as well. The three evolution steps of 'Father Picard' are: beginning, nothing happens, amateurish fade-out – and the predominantly harmless instrumental 'Insanity' is as insane as a glass of milk.

All in all, there is no reason for public outrage, because the album offers more positive than negative aspects. Most songs can rely on a solid and comprehensible structure, King plays with his voice skilfully and some well-integrated tempo shifts lend the album a dynamic touch. This feature makes up for a lack of basic heaviness. This is no work that “hurts” the listener’s ears. I don’t want to use the evil word “polished”, but The Eye does definitely fail to offer edges and corners. Bulky or even progressive sequences are completely missing. Fate once was a ground-breaking formation; King rather walks on well-paved roads.

The Eye is a recommendable full-length, but do not expect any kind of sensation. The material rather rests in itself. Only one extraordinary track occurs. The calm yet evil 'Two Little Girls' adds value to the output due to its special atmosphere. Maybe it’s not fair to refer on “Melissa” and “Don’t Break the Oath” until the end of days and of course one can discuss whether it makes sense to compare King’s albums with Fate’s classics. However, I miss the occult wickedness of the old masterpieces and one or two outstanding riffs would have enriched the output as well. Nevertheless, people with an affinity for medieval stories in religious surrounding and a weakness for relatively melodic songs can check this work.