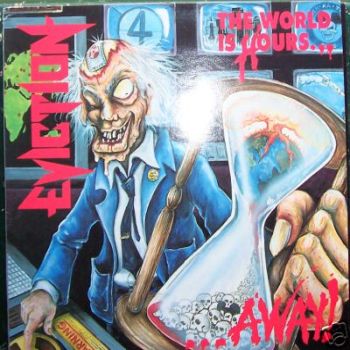 Back when I was in my early teens both thrash metal as well as the medium of vinyl had become very unpopular, something hard to imagine nowadays. I remember picking up metal LP's for peanuts because, besides me, no one cared anymore. I have to admit that it was mostly records by bands that came late for the party anyway, like Gothic Slam, Estigia, Slaughter House and, indeed, Eviction's The World Is Hours Away. I remember at the time being unimpressed by the latter but kept the record anyway. Recently I put it on again and I have to admit that it isn't all that bad actually. Sounds like it's time to revise some history then.

I remember back then looking at the band pic on the cover and expecting something in the style of early Exodus or D.R.I. and I was probably bummed out because it wasn't a carbon copy of those classic bands. Listening to it now I hear a sound that makes me think more of old New York hardcore bands such as Sheer Terror, Breakdown, Killing Time or Judge, mixed with classic thrash metal like early Testament and Vio-lence. For a good part the music is up-tempo but not crazy fast and the band know how to keep the flow in the music by varying these parts. In its totality they sometimes remind me of M.O.D. as well as Suicidal Tendencies around the time of their "Lights, Camera, Revolution" album, but there's also some punky influences like in second track 'Listen'. I can't put my finger on it exactly, but the name of Reagan Youth popped into my mind, which isn't bad at all, just good old fashioned hardcore punk. The A side of this record is really great, I'm pretty impressed by the band's mixture of thrash and hardcore but unfortunately they don't stick their landing. Halfway the B side the rot sets in when at the end of 'Behind the Mask' vocalist Todd starts Robb Flynning it with lines like "Yo, Fuck It Up, Homeboy" and "Word!". Yeah, better leave the slang to Biohazard, buddy. The harmonica intro to the following song 'Open Your Eyes' conjures up the image of Jackyl, that gimmicky monstrosity with the chainsaw song, but when the song picks up it's not that bad actually. Album closer 'American Way' is just plain boring and sounds like something that Mötley Crüe would have dumped in the garbage bin. Give me the almost eponymous Sacred Reich track in its place.

In my opinion this is a pretty solid hardcore/thrash record if you skip the last three tracks on here. If you have a heart for Bay Area thrash and also like albums like Cro Mags' "Best Wishes" or even Slapshot's "Sudden Death Overtime" this should fit you just fine. Despite its flaws it's a pretty solid album that's worth a listen.