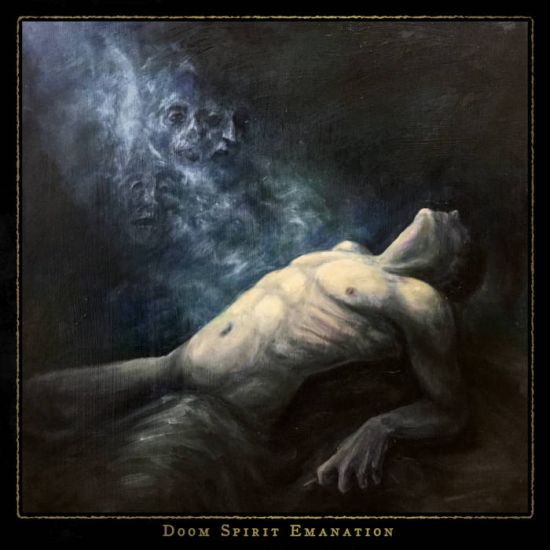 Having lost track of the band after hearing their debut demo following the departure from their old name, Cemetery Whore, Rites of Daath managed to reunite with my memory through Godz Ov War Productions. The band has had a long time to think about what they want to do precisely with their soul sucking style of death/doom metal, and you could only imagine that by now they have assembled a megalith to be proud of. It is with utmost pleasure and elation I signal to all the arrival of their highly anticipated full-length album after three years of silence, Doom Spirit Emanation.

At the time of receiving the material I had been listening to Ahab's "The Call of the Wretched Sea" and thought, hmmm, should I interrupt this funeral doom metal monsterpiece just to check out some new band's effort. Turns out, that 'new band' spoken of was Rites of Daath, so proceeding with caution and respect I asked the gods of metal to forgive my spontaneous divergences from a funeral doom legend to something lost on my radar for some time now, (to the point I could not even remember the effect of Hexing Graves).

A reintroduction to something I picked up roughly 3 years ago and could identify the merit and mileage held within a real reward for sacrifice. And from the first notes played on 'Doom Spirit Emanation', like a stroke of divine insight, it occurred to me why my interest in Rites of Daath was so great. An amassing of sounds gave way to a Grave Upheaval-esque concomitant. A stillborn flame fed and fanned till its incandescent glow became a thing threatening to munch-to-bits the mass of nearing entities. Its motion, stoned at first glance, yet with time would evoke a scholastic conduct telling of the band's musical bravura.

Opening track 'Doom Spirit Emanation' arrives with steam and a ritual cloaked throbbing under the restless pulse of distorted guitars that play with theatrical semblance whilst possessing that morose thickness and heavy density Polish bands often have. Yes, this is very much death/doom but not as slow as you would imagine given the scampering manner in which the music is played, like an embodying of the artwork seemingly depicting some sort of expulsion, there is an urgency attached to the instrumentation that puts the listener in an uncomfortable position when trying to piece apart, predict and question Doom Spirit Emanation's mobility given the black metal styled drumming and guitaring-(at times).

Same can be said about 'The Accursing Tongues' and 'Shrines of Seclusion', though some instances of doom metal actually occur, the black metal drumming often reemerges as one of the more dominant aspects of the record. The vocals have the gestures of a Temple Nightside through its cavernous undulations utilized on 'Primeval Depths of Chaos' (that is for me the best particle on Doom Spirit Emanation), whilst the riffs are handled and played like the foretelling of fermenting peril. Flourishing with many tempo fluxes and for the first time a real lengthy death/doom passage that lifts and leads the music into a section reminiscent of Ellorsith's "Exposure to the Elements" (drum wise), 'Primeval Depths of Chaos' transforms the album into a thing of indefeasible iniquity.

Doom Spirit Emanation is quite the surprise after such a lengthy season of silence. Another win for Poland and more-so, Rites of Daath, hence displaying the excellence of their productivity on their most advanced piece of work.