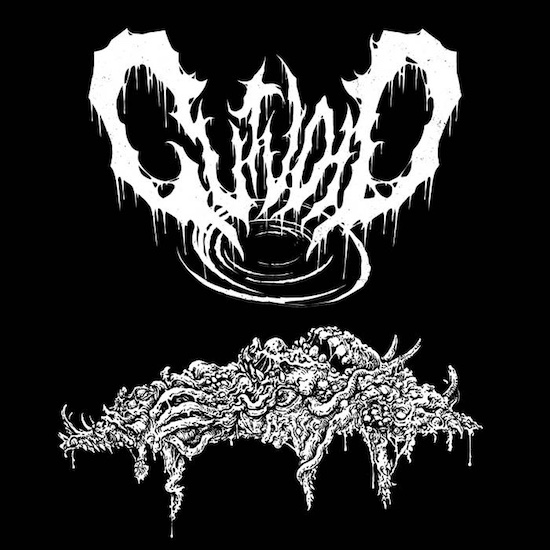 Gutvoid have something special going on here; they are playing in territory I hoped Blood Incantation would have ventured into by now. Instead it's Gutvoid that makes landfall within this cosmic realm with their debut recording Astral Bestiary. Reluctant at first to give the album a try, but as chatter around the band and their EP grew louder, resistance became harder.

Delving in and being greeted by 'They Came Dripping from the Stars' was the hammer on the toe; an awakening to something that has real potential for expansion and adventure. We are probably staring at one of the next big entities in underground death metal (given the explosion of cosmic themed metal) if Gutvoid are able to follow up Astral Bestiary with musicianship and backing themes just as good to support their vision.

It’s all here, monstrous cavernous growls, drumming that lingers between the plane of technicality and primitivism all the while being held together with guitar work dripping with atmosphere. Of course, there are the obvious influences that would make way through Gutvoid's instrumental approach at times (Blood Timeghoul, Blood Incantation, Teleport, Vektor, even Undergang) yet the band has found a way to make the texture of their music appear fresh to a degree on Astral Bestiary.

The three pieces here are very immersive, with all tracks boasting a sense of fear tugged by a celestial beauty and adventure. 'Entranced by a Frozen Dawn' is the peak on the album, offering listeners a death metal delight that casts an ambience of ominous dread yet high anticipation of discovery. It’s a diligent piece of music that manages to extract the best bits of what Gutvoid appear to be reaching for and rearranges them in a way that would speak to the listeners interpretation and predicted projection of the music. Guitars, vocals, drumming and bass congregate and assemble with rhythmic discipline as the music altogether is steered by a recurring passive atmosphere. It's here Gutvoid manage to clearly convey their intentions yet with its theme, a sense of obscurity exists thus instigating inquisitiveness.

Derivative-of does not always mean there is a lack of merit, and Astral Bestiary is certainly one of those examples. Yes, the similarities may be evident but it’s still a high recommendation.

This voyage Gutvoid have begun is paved with gold, hopefully the band has enough inventory space to store it. One can see nothing less coming from the Canadian Quartet should they venture forward into full-length territory.