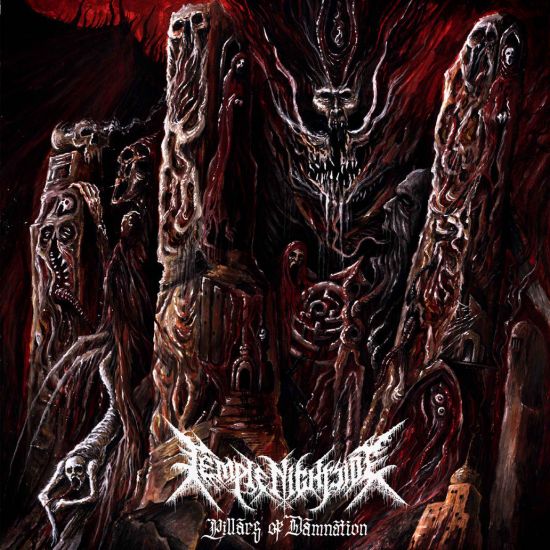 Temple Nightside, the ghastly mage lurking the domain of suffering, everlasting pain and agony. From Condemnation to The Hecatomb to Recondemnation, the entity persists with its disregard and disrespect of all that is light. And now from the fallen, from the accursed and barren, the frigid breath of damnation surmounts to once again pull innocence from embrace and benevolence to a place of malediction and harm. Pillars of Damnation proceeds to usurp and dethrone.

Burnt amidst the contaminated, dripping smegma of sacrilege, the meek cry out in crescendo, a 'Contagion of Heresy' introduces the listener to what the band has undergone through their polished, updated sound on Pillars of Damnation. Remembering the route Recondemnation took to achieve the mastery it did in 2018, to now reimagining the sound and taking it to new heights, this riffing monstrosity is anointed with a vocal rancor and drumming demeanor all too familiar and characteristic of Temple Nightside.

'Death Eucharist', the first track that incited craze upon being heard as a promotional single assert itself as a key component to the full landscape of terror. The sudden, ritualistic thump of the toms following an initiating riff, then from the yak of a beast emerging with vigor from the abyss, howling vocals intervene and with muscular jaws, erect a sonic tower of altitudinal awe.

Still corrupt to the core, Temple Nightside on Pillars of Damnation switch between exclusive sections of black and death metal to victimize the listener all the while reconnecting itself with a combination of both in key instances. In an elusive act, a slight of hand in guitar and drumming departments is applied on tracks such as 'Morose Triumphalis' to manage this feat. Thus, it cannot go without note that the drumming on Pillars of Damnation is incredible. Songs such as 'Death Eucharist' and 'Wreathed in Agony' disperse vibrations of scholarly discipline when maneuvering and manipulating the field amidst the hurricane of riffs.

An entry being 'The Carrion Veil' or 'Blood Cathedral' embody the seemingly diseased depiction as the cover artwork easily conveying the philosophy of desecration from a graphical perspective. This is something Temple Nightside have always appeared to have no trouble doing, and on Pillars of Damnation the same follows suit. 'The Carrion Veil' most notably is conducted as a dismal ode to Grave Upheaval via its discomforting motion and advances onto the listener. With its ointments bearing the proprieties and principles of the wretched rituals in said entity, the listener is aneled from forehead to ankle in communion.

And to cast the final stone onto a near buried shrine of luminosity, execrable ideas are put into action on 'Damnation', a serment to Grave Upheaval, the most ceremonious of tracks to be fostered on Pillars of Damnation, again showing its respect for the long standing deity within the underworld of death metal. Paced like a worm, the procedure is patient as it moves about like an extraterrestrial or specter combing the field for any survivors of its attack. Externalizing the experience whilst making sure to not mitigate the temperature of the record, the entry utilizes a dominant bass and drum combination in conspiracy with the wailing guitar chord progressions, thus a funereal closure is brought to Pillars of Damnation.

Parting ways with Innocence
'The Carrion Veil'
'In Absentia'

So mote it be
'Damnation'