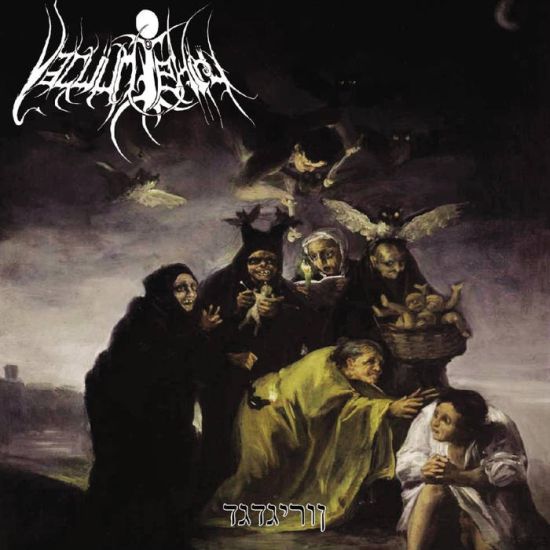 Bearing a resemblance that cannot be ignored with the legends of the underground known under the name of Inquisition, the mysterious ensemble called Vacuum Tehiru delivered us a surprisingly well-crafted black metal record. There is something happening in the valley of the Rhone, of which I became aware only recently; a label named the same as the band Vacuum Tehiru has released several high-quality albums, that match each other in imagery and the production quality, yet all seem to have their own preferred strain of black metal. Perhaps the inspiration or even motivation for the French came from their Swiss neighbors, who founded their remarkable musical alliance known as the Helvetic Underground Committee, perhaps it is simply a single French with a decent number of one-man projects; the insight into the whole organization is something that we are deprived of at the moment, yet what we do know for sure is that they are responsible for a good number of killer records such as this one.

Intro tracks have the sole purpose of providing an insight into the concept or at least atmosphere of the entire album, yet often fail miserably as the sound sample is often chosen seemingly arbitrarily, yet 358 begins silently with the sounds in the background slowly building up while the foreground suddenly gets occupied with weird chanting, that is nothing else but an offspring of Dagon's vocal heritage. Thus, the intro, despite being simply boring, actually has a realistic purpose, which I have to compliment for its uniqueness.

As the first real and title track on this album, '358' is quite an interesting piece judging by the concept itself. In numerology, 358 represents the angel number, which is often associated with several positive aspects such as wealth and luck; altogether a good bunch of superstitions, easily sold to the brain dead in the west. Even the Catholic Church rejects any systematic divination of a number and perceives such acts as simply... stupid, but Vacuum Tehiru is just selling blasphemy wrapped in a nice coat of darkened, mysterious imagery.

Another noteworthy aspect of the imagery is that it is not the first that this specific painting (de Goya's “The Witches' Sabbath”) was used for an extreme metal album cover. The Swiss death/black metal band Amon published in 1995 their LP “Shemhamforash” that featured the exact same painting as cover art and a suspiciously similar vocal style, although musically it bore a greater resemblance to death metal while Vacuum Tehiru focuses on the black metal aspects. Due to the geographical proximity, the similarity of the vocal style and the involvement of Ludovic Tournier in the project, the only known member to be actually involved in the French black metal scene, we can reasonably assume that this isn't a clone band which nefariously ripped off the Swiss Amon, but rather a band trying to pay respect to the regional legends.

Musically, 358 is a blend of death and black metal with the latter one being prevalent. The aforementioned first real track makes one clear that this is something strange, although not necessarily something that is sonically unrelated to everything that you have heard before. The odd timings and the sudden breaks, infused with the strange interpretation of Inquisition vocals give the entire album a unique atmosphere that is, despite being quite dreadful, simply enjoyable for fans of acts such as Inquisition. The riffs are fast in general with an incredible production quality, which I would not describe as being of high quality, but surely it puts the aggressive buzzing sound of the guitars in the foreground they deserve. Weird, but nonetheless quite fitting are the minor industrial influences that are always a good choice for black metal bands trying to evoke a hellish atmosphere. Still, there is always the danger of not balancing them out with the riffing attributes of black metal, yet fortunately, the riffs were not out of proportion and Ludovic Tournier can once again go home from the studio and be proud of himself.

The drums are something that remains mostly unnoticed for the greater part of the album as the vocals and menacing riffs occupy the foreground. It is a matter of regret for me that I paid so little attention to the incredible skill of Pierre Rettien while I was listening to this album for the first time. The very first demonstration of his drumming skills is the drum solo on the title track. From there on, he is simply a beast, playing at fast tempos with incredible precision and timing, yet not losing the primitive edge of black metal on his perfectly tuned drums.

As of the vocals, they are the eccentric element that captures your attention. Those Inquisition vocals, if I may describe them as such, are monotonous and sound like a choir of frogs doing a well-coordinated unholy chant. By this, I mean that although they are almost unique, I cannot state enough that they are something that is performed quite well as there is only one comparison that could possibly be made and that is Dagon. Dagon is by far a better vocalist on a grand scale, yet whether he would be able to follow the incredible riffs and match the atmosphere of 358 is another topic of discussion. Tournier's vocals seem to be in a symbiotic relationship with his own riffs since one cannot imagine them fitting into any other musical context with perhaps Amon's "Shemhamforash" being the only exception.

If we were to speak about the bad material that managed to get past the sensors of these experienced black metal gentlemen, there would not be much to mention. A decent amount of thought has been put into the song structures and occasional melodies appear with a few shreddy parts in order to prevent the atmosphere from becoming too bleak and simple. The only problem is that the vocals, despite their contribution to the uniqueness of this album, take their toll manifested in monotony. The vocals simply do not transmit a message beyond the lyrics, which are hard to understand since the distortion in Tournier's voice is just too great for the words to be distinguishable, but they still generate an atmosphere packed with mystery.

With all the negative and good stuff taken into calculation and judging by how much I enjoyed this album, I would definitely recommend it. It is beyond my concept of rationality to say that the vocals are good, yet the amount of attention they capture is simply astounding and I would certainly not abstain from spinning this one for a few hours on repeat. Now, stop reading this review and buy the album.