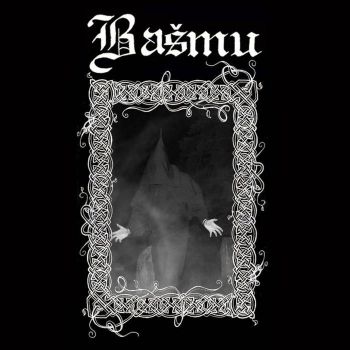 Vvitchblood was originally recorded and released in 2017 but was available only on cassette. This not-so-pleasant Canadian project is the work of a single man with an excessive obsession with Mesopotamian mythology, known by his stage name "Xûlthys". In recent years, Xûlthys has been quite busy with a number of projects like Chaoist, Drenglyndr, Flešš, Arcane Cavern, all of which have one thing in common except Flešš; they are one-man projects that utilize a very raw sound. Unnecessarily obscure and sometimes eccentric qualities are beneficial to any musical endeavor, but once they are maximized and pushed to the very edge of a nihilistic worldview, the result will be completely cringy and uncomfortable to listen to.

The intro track is also the title track and starts with a strange synthesizer sound, which would definitely have its place in a low-budget horror movie. After one minute of this overly generic and inappropriate intro, a blast beat starts to dominate the sonic environment, followed by a decent raw guitar sound (decent by black metal standards of course). Sadly, what could have been solid raw black metal is interrupted by vocals that seem to have been recorded with an absurd number of additional effects in a basement and too close to the microphone. Also, the majority of the vocals just sound like distorted whispers.

The second track features a sound shift that dominates most of the rest of the album; the guitar sound drifts into experimental waters that have an awful amateurish odor, and synths are incorporated into the sound to add emphasis to the atmosphere. For some reason, the drum sound also changes completely, and although it sounds more organic, it doesn't bear any resemblance to the amount of energy on the first track. Not a single interesting drum pattern appears on the whole album, and the general impression is simply that the drumming is highly unenthusiastic. It also sounds amateurish, as there is always a delay in the tempo changes compared to the guitars.

Without any interesting riffs, without noteworthy drum parts and with a terrible production, the emphasis is on the atmosphere, as already mentioned. Thus, this album can bear the title of background music, but whether intentionally or not, one has to say that the atmosphere is grotesque and generally causes an unpleasant feeling when listening. It is undoubtedly one of those rare albums that are completely devoid of any beauty and could, therefore, be qualified as nihilistic art, but given the occult themes and the mere fact that madness probably sounds like this, it is hard to believe that this is the primary intention.

Granted, it sounds highly unusual, and you may be attracted by the obscure sound, but if you listen carefully you will notice that artists such as Xasthur, Maugrim or Intristare have already experimented with similar atmospheres. This does not mean that Bašmu ripped off these bands, it does not even mean that this project is directly inspired by them; what it does mean is that several artists have already used the same production and recording methods and came out with a similar sound, so Vvitchblood does not even have a charm of originality and obscurity.

Vvitchblood is what every abominable thought sounds like; disharmonic, grotesque and simply depressing. Without any quality to carry the album or any positive aspect to mention, this album is definitely not recommendable.