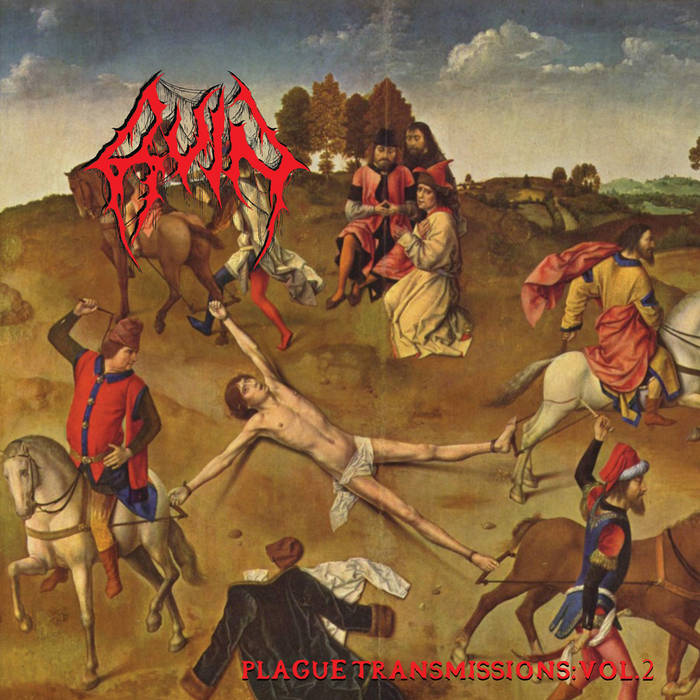 These last few years there have been a fair few death metal bands that manage to inject a genuine feel of unease into their art. I'm thinking of bands like Fluids, Caustic Wound or Visceral Mass, acts that manage to conjure up a threatening, truly unsettling atmosphere with their music. When listening to these bands, you just can't help looking over your shoulder now and then. It's a feeling that not a lot of acts know how to capture, but those mentioned sure can, and among those bands we also find Ruin.

This is a collection of older stuff the band released on vinyl and tape; perfect for someone like me who has a mortgage and bills to pay and can't afford to purchase every release a band shits out. However, the thing is this: it may be a compilation, but it sure has all the cohesiveness of a full length studio album. Which is nice.

The music featured here is shit-heavy, imagine a band like Incantation or Blaspherian playing Autopsy-like old school death metal with touches of crust punk, but a lot filthier. A good share of today's death metal bands have a tendency to go for a cleaner sound and/or put more emphasis on technical proficiency, but Ruin go for the neanderthal approach, assaulting the listener with pounding, bass-heavy death metal. This sounds so filthy, you'll need a napkin to wipe away the stains after listening. The music is pretty varied, with primitive thrash tempos alternating with grindcore infused savagery, with the band slowing down to a crawl at times, like in 'And Soon the Darkness' and 'The Bends'. These doomed-out dirges benefit enormously from the grimy down-tuned guitars, making them sound utterly crushing. On top of this come the gargling vocals of Mihell J. Slaughter, with a ghastly delivery reminding me of Necrophagia's Killjoy (R.I.P.) more than once, rounding it all up in a nice festering package of filth-laden death metal heaviness. If there ever was a band that sounded like they would like to rip off your head and then proceed to piss into the hole in your neck, it is without a doubt Ruin.

I also would like to mention that this album contains one of the very rare occurrences of a successful Discharge cover. You would think that covering an act like that would be easy, but it is only very seldom that a metal band succeeds in establishing that uncomfortable atmosphere early Discharge exuded, but Ruin utterly nails it, in their very own way. There's also a cover of NME, a band that never really got the recognition they deserved, and I have to say that this track blends in effortlessly with the rest of the material. Not really a surprise, because Ruin's demented approach to death metal is actually very similar to what NME did with their music. Simply awesome!

The menacing atmosphere comes not only through the music, but the samples throughout contribute to this unsettling feeling in great part. In general I'm not that hot about spoken samples in death metal, but here they accompany the music flawlessly. The atmosphere created by this combination really gives the listener the feeling like something really unpleasant is about to go down. The first time I heard the intro to 'A Foul Stench of Human Beings', the only thing I could say was "Damn ... that's intense ...".

This is a band that embodies the spirit of underground death metal from back in the day: heavy, aggressive and at times very disturbing, establishing a violent atmosphere of utter discomfort. If you like your death metal sick, raw and dirty, I'd say: grab your shotgun and razor blades and immerse yourself in the vortex of menace that is Ruin.