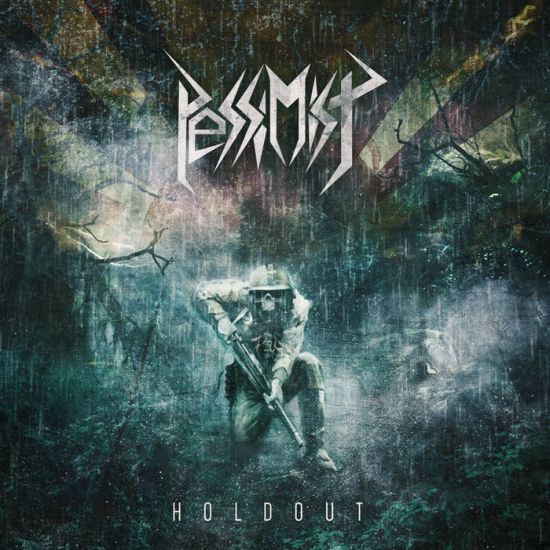 Those days are not so far when Overkill, Testament, Sodom, Kreator and Exodus will cease to exist! Their absence will create emptiness, but greater new forces always arise to fill the void, by the call of mother nature. The Teutonic thrash chapels Kreator, Sodom, Destruction and Tankard are well known. But the presence of hidden new forces, who have the capability to fill their insurmountable void can sometimes be found by digging deeper into the genre throat. The five brave warriors from Weil am Rhein (Baden-Württemberg) known as Pessimist are surely such a force and they just ended their seven-year dry spell with a third full-length called Holdout and by raising a perilous view about ‘war’, which has always been visited and revisited by many titans of the genre. But why visit and revisit again as war always stays the same? But how does this always same war sound like? Seven years after their previous full length, Death From Above, Pessimist once again provided a musical answer to this question with Holdout.

It comes as no surprise when you first check in: war is brutal, loud and merciless. This should not give an impression that, Holdout is a mere conceptual ‘war’ themed record as Pessimist front man Michael “TZ” Schweitzer carries intense lyrics about historical examples of the abysses of mankind while pointing out the shocking events humanity created and had to face. These historical examples merge into a pessimistic feel and worldview that this band must got its name from. The varied, fast, hard thrash metal and a big splash of melody - part of the band’s distinctiveness by keeping traditional old-school thrash metal alive and busting genre borders with uncommon riffage and melodies, established Pessimist as raw energy source who can be pushed to the limit but will always persevere against all the oddities. This message of perseverance became manifested in the biography of the band because of the steady interruptions of songwriting-processes, long term planning disrupted by lineup changes and other strokes of fate. However, Pessimist is still here and came out valiantly, which may take a long time to be the Death From Above successor but the end result can be more than heard.

Holdout - swift and crusty but hold no doubt as Pessimist stayed true to their style, which clearly has its roots in the thrash of the old school made in USA and Germany. The band sounds old school and yet modern when it fires its razor-sharp riffs with mostly proper speed. The technical demands of all compositions, whose playing time is over five minutes on average, are certainly high. Nevertheless, they maintain the necessary catchiness and commute between the barrage, where they know how to create a really nasty and oppressive atmosphere in throttled timing. In nine titles lengthening little less than 55-minute, band deals extremely and critically with each subject matter, as the title track 'Holdout' demonstrates. The lyric video said - these were soldiers who were mostly cut off from the rest of the world by the American tactics of island jumping and had no means of communication on the Pacific Islands. Many Japanese soldiers were initially unaware of the Japanese surrender and hid themselves or continued to fight for many different reasons for many years. The last secured holdout was Nakamura Teruo, which only surrendered to Morotai, Indonesia in 1974. In other words, the Pacific War or the Second World War lasted until 1974 for Nakamura Teruo. The song, which then has some Sodom traces in the sound, can be mentioned as the highlight of the album and will give you the little essence of what's coming.

The furious opener 'Landsknecht' - which is about the ‘Thirty Years War’, when the Landsknecht armies ruled the battlefields for the last time. Assume a population of 16 to 18 million people in the Holy Roman Empire in 1618 and a loss of four to six million by 1648 and just imagine that, two generations grew up only with war, hunger, diseases, epidemics, murder, violence, rape, depopulated areas and despite all of this, a society and various institutions have formed again – it’s sounds unbelievable and the composition expertly render the insanity of this great catastrophe and valiant resurgence. Approaching the mischievously pounding 'Roaring Thunder' might be shivering but wait for the most brutal number on the album, 'Kill & Become', where, in addition to the striking screams, there are also hardcore shouts and some death-like growls to be heard ... at damn high speed, of course. It was enticing, when 'Death Awaits' appears, as it immediately led me thought of “Hell Awaits” by Slayer. There are certain minor similarities, especially at the beginning. Nevertheless, the pessimists travel much faster here to break that Slayer thought, with their Pessimist signatures. The song 'The Mountain Of Death' will stay long deep inside your head, as this is about the battle for the Hartmannswillerkopf in the Vosges in the First World War, where around 30,000 French and German soldiers died in the process and around twice as many were wounded. And the composition felt like created to re-visit the Hartmannswillerkopf and realizing the futility of war like no other - which is no wonder an eccentric example of their masterful song-writing strength.

One which stands out absolutely is the conclusion with '7:28' - almost eleven-minute opus, which can be used as all-round tips. This song is about the ‘Battle of the Somme’ in the First World War. '7:28' refers to July 1, 1916 at 7:28 a.m., when British pioneers detonated 19 mines almost simultaneously under the German positions. Apparently, these explosions were audible as far as London. The song tells a piece of this terrible battle on all sides and the band masterfully built the chorus in three languages to remind all victims equally. A unique piece of creativity, that never envisioned in such way and as a listener, you can expect an eleven-minute bath of emotions - from frenzy to defiant stamping, melancholy pausing and brute anger, everything is there by combining thrash with doom metal and tops off an already great album. Despite all the brutality, the melody also has a greater presence in the whole record, which made sure that we don't just have the face-up songs, the melody also finds its place in all movements and transitions, to convey the insurmountable tragedy and hopelessness arises from such conflicts throughout history.

Holdout combines the strengths of Call To War and Death From Above and is the clear musical development of the two albums. With an album cover that exudes the loneliness that comes into play in the title song 'Holdout', Pessimist created a pure thrash album which meant to be listened and explored deeply and I can warmly recommend Holdout to any follower, especially of the older school to experience this, which is now released in-cooperation with MDD Records.