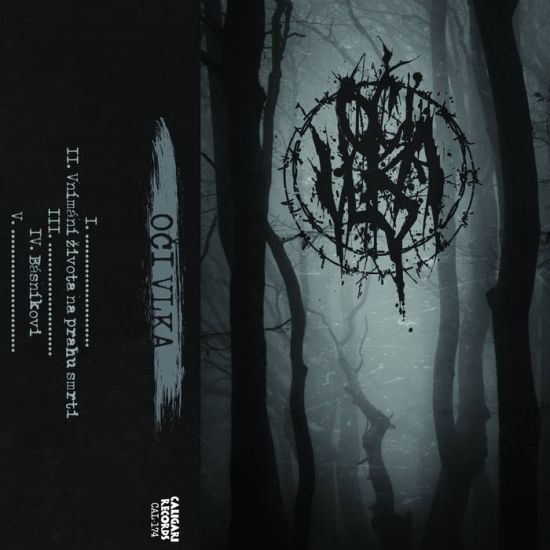 Reading about the surroundings these two gentlemen have dwelled in and continue to, has made an all too intriguing expectation become a reality. Hailing from Czech Republic, in the city of Chomutov, Oči Vlka's demo captures the social decline and overall environmental effects on its inhabitants. With this demo, Oči Vlka extend invitations to their side of the world in which beatitude and serenity live coercively with existential despair.

Like trying to escape a labyrinth of harsh realities, only to be misled by the deceptive light at the end of the tunnel that only leads to square one, this demo imprisons the listener with an oppressive radiation of varied metallic forms. A molten eruption of black metal sonicism merged with a cinereous smearing of crust, d-beat, sludge, doom and death metal, this demo seemingly could not have expressed more torrential torpidity in its near 30-minute undertaking.

Managing to immediately establish a despair-drenched atmosphere from the onset with the first enigmatic piece to sprawling apart the legs for a bit more intimacy through 'Vnimani Na Prahu Smrti', the duo makes the tedious task of envisioning such a downcast milieu turn into a musical reality. Oppressive all the while trance inducing, the power chords fused with melodic tremolo picking, vibrant drumming and puddling vocals invoke a battle of states like a toggle between the beautiful and hideous striving for dominance.

Yet the ominous persists and is immune to being abolished, thus the music never expresses emancipation from the possibility of vulnerability constantly bearing down on the listener. Not forgetting the thunderous production conspiring with the duo's playing that makes this demo cold and uninviting, Escapism is but a myth as hostility and despondency take-over.

One could carry on about their musical capacity and try to attach or lump them into a nearsighted classification, but that would seem a bit too inconsiderate especially after reading about the many musical interests of the band. No one influence is adhered to, instead a collage of sounds and vibrations are compressed into one overwhelming landscape, internalizing the ongoing combat between solitude and adversity in the shape of depression and mental decline.

Oči Vlka is a force draped in the fabric of their home, and their music embodies such.