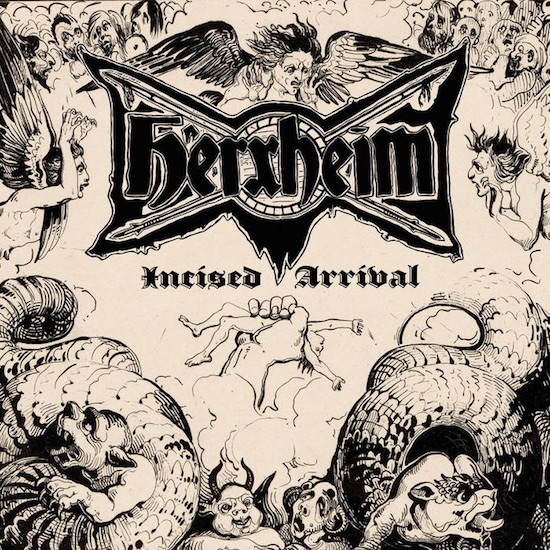 Draped in keyboard synth and crawling from whichever cursed tomb the late 80s failed at thoroughly burying, Herxheim is unshackled for an Incised Arrival. Black doom metal with an attitude resembling that of black and roll, however under the hex of bands the likes of Mortuary Drape and even Faustcoven, Herxheim mounts the ladder in descent to the earliest echoes of dungeons primitivism in black metal. Draining the nectar of the era and directly pouring it into the veins of an entity emerging from the cinders of the experimental Howls of Ebb, Incised Arrival demonstrates a precision and fluency matched only by some of the genre’s greats. Cutting deep with razor sharp guitars, redolent synth, minacious vocals and an archaic drum and bass combination, Incised Arrival casts spells of revival into the old fashioned, yet treasured era of the craft.

There was a time when keyboards and black metal evoked feelings of sheer loathe among the 'trve' and 'kvlt' but would soon come to be a thing of welcome with bands like Emperor and Burzum incorporating the forbidden foreign elements in their music to remarkable success. The prototype has been revisited many times and has transcended black metal to now spanning across all sub-genres of metal. Herxheim, heads into the murkiness full throttle with their early 1st wave of black metal primitivism that'd soon be corrupted by the sounds of alarming ambient advancements.

As though being encaged in one's own thoughts of doom, the music here sort of constructs a wall around the listener by means of its groovy approach. Take for instance 'Lesson Crescent' and 'Branded by Pentagram', both of which are strikingly different in pacing but adhere to a groovy flow mimicking black/doom/rock. It's through this the music is able to take full effect and reel the listener in. The synth in both these tracks utilize slower sections to broaden the effect that transfer-to and build up songs down the order.

I admire the way in which the synth also lays dormant or better, possum, for some time, like a snake with its mouth open waiting for prey to enter unsuspectingly. 'Lesson Crescent' and 'Chateaux Delirium' do this well, oftentimes giving the listener a feeling of uncertainty before striking at the very last moment with deep piercing synth passages almost sleep inducing. Amidst that thrashing black metal attack, you feel as though being held captive until your number is suddenly up for torture or to walk the halls of horror.

I found the production to be considerate and discreet enough to allow the synth to supplement and at times even command the music in so attiring the album with a genuine doom metal feeling. Some samples of forebode, eroticism and lament are also added, giving songs like 'Wanton of Idols' and 'Chateau Delirium' an erected sense of bleakness conspiring with the anguished vocals.

The music on Incised Arrival does not attempt to push the boundary of the subgenre in any way, instead play conservatively to an already established order. It seems comfortable within its own confines and is competent at creating something worthwhile with the standard components of black/doom metal tapestry. A must have for those interest in the slower, darker workings of the genre.