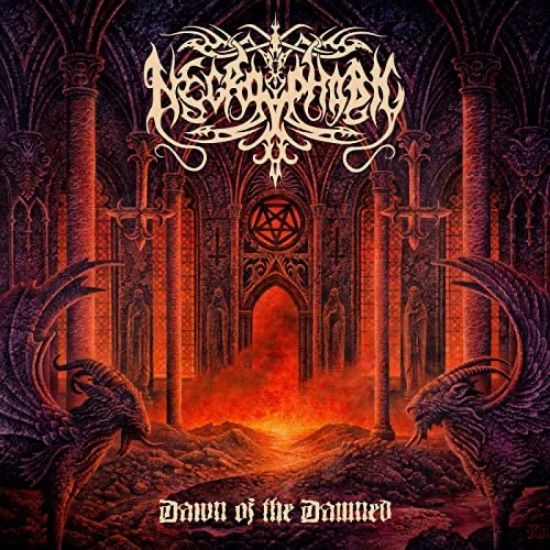 Band? Institution? Legend? Decide for yourself, but one thing is for sure: Necrophobic do not need to fear any competitor. Since aeons and as mentioned already in a previous review, the Swedish throne of black death metal is fiercely contested, but Dark Funeral are always sleeping too long (one album in the last ten years!), Marduk have many brilliant works, but also a few less strong outputs and Eurynomos or Possession are great, but not Swedish. So maybe it’s Necrophobic who are one step ahead of their brothers in spirit? We do not need to find the ultimate answer to this question, let’s just put the spotlight on the different facets of the five-piece, for example…

…their line-up. It has been more or less stable since the overwhelming Mark of the Necrogram. Only the man at the bass guitar is new and Allan Lundholm fits neatly into the formation. Of course, we can miss Alexander Friberg who has been part of Necrophobic already on their masterpiece Death to All. Yet it is of higher relevance that main composer Sebastian Ramstedt still stands firmly on the navigation bridge. The man who has already written almost the entire album from 2018 guarantees a high standard and a close connection between Dawn of the Damned and its older brother. Nevertheless, there is a surprising element concerning the contributors of the brand new album. Necrophobic invited Destruction’s Schmier to shout some lines of the closer. Honestly, I am astonished. It feels like Bayern München, the European football kings of 2020, asks a player of my favourite team (FSV Frankfurt, fourth-class, it’s truly sad!) to join their team. I mean, does anybody remember the last strong full-length of Destruction? Once they were kings, but everything they released after “All Hell Breaks Loose” was mediocre or worse. Inter alia the track list of their recent live album indicates that this formation lives in the past. Necrophobic is the exact opposite. The Swedes release new classics with nearly every new album. Dawn of the Damned marks no exception to this rule. (And only to stay fair: Schmier performs well here and naturally he delivers some high-pitched screams. Nevertheless, it’s the fiendish charisma of Anders Strokirk that fits perfectly with the music of this black death bastard.)

…the wickedness of their material. Necrophobic have always optimized their sound in order to combine pure evil with a gargantuan musicality. There is not the smallest tinge of thoughtlessness or even stupidity in their compositions. Everything sounds unholy yet smooth at the same time, vehement yet sublime, ruthless yet mature. Perhaps Ramstedt and his colleagues are not among the most spontaneous bands of the universe, but they are also light years away from an academic approach. Moreover, their wicked songs have almost magical powers – as soon as I hear them, they seem to become a part of me. A very little part I cannot see or touch but feel. I am not able to write music, but otherwise I would try to compose exactly the kind of terrifying sound Necrophobic create with great ease. Their best songs unleash all demons I know in music. No doubt, this quintet guides you safely to the godless core of (extreme) metal.

…the songs themselves. Where to begin? Well,'Mirror Black' fascinates with its howling guitars that make not only sensitive persons shiver – and its merciless “Fall… fall… fall… fall” echoes embody pure cruelty. Songs like the title track or 'Darkness Be My Guide' stand in the tradition of killers such as 'Sacrosanct' or 'Crown of Horns'. They are characterised by their ingenious flow and their strict, sparks-flying velocity. But of course, they are not one-dimensional. Necrophobic master the art to integrate less neck-breaking sections without hurting the violent aura of these eruptions in any way. By contrast, 'Tartarian Winds' marches stoically through mid-tempo regions and its guitar work flirts with the charm and the riffing of “Blood Fire Death” (the title track) or “Enter the Eternal Fire” – of course without being a stale copy of these classics. Its predominantly less rapid approach is not at the expense of the song’s heaviness. Quite the opposite: it develops an abysmal, enigmatic depth. And of course I cannot write this review without mentioning the two monumental tracks which cross the seven minutes mark. 'The Infernal Depths of Eternity' holds many speedy sections, while 'The Return of a Long Lost Soul' shows a more epic side of Necrophobic’s art. But the best is: both are simply excellent. Yet I could mention each and every track, even the stage-setting intro; all pieces add value to Dawn of the Damned. Or to express it with the words of a good friend of mine: “there is no bad surprise, just quality.” I totally agree.

…the production. Do I really need to emphasize that it is immaculate? Fredrik Folkare has done a great job again. He was already responsible for the sound of Mark of the Necrogram and I guess he left the studio after the recordings in 2018 were very satisfied, because the mix of Dawn of the Damned lies in close proximity to that of its predecessor. Furthermore, the album spreads identical vibes. Right here and right now is the moment for some grumpy clowns to stand up and to moan about stagnation. Dear clowns, you are just assholes. Let me explain. Folkare saw obviously no reason to change the perfect sound and I am glad that he did not seek new ways as an end in itself. This dude was a good guitarist on Womb of Lilithu, but he is an outstanding sound engineer.

…the stamina of the band. Nine albums in 27 years speak a clear language, but this is just a quantity key figure. More important is that the Swedes still act absolutely authentic after all these years and the leather and spikes appearance of the long-haired envoys of darkness underlines their integrity impressively. Okay, drummer Joakim Sterner is bald, but he is the only constant in the history of the band and therefore he is at least long-haired in a figurative sense. Hairy matters aside, what can we call Necrophobic? It’s surely not “just another band”, but it is also no institution and even the word legend seems too small for them. So let’s just use their name. Necrophobic – these eleven letters stand for themselves and they alone make clear that we are listening to the elite of the elite.