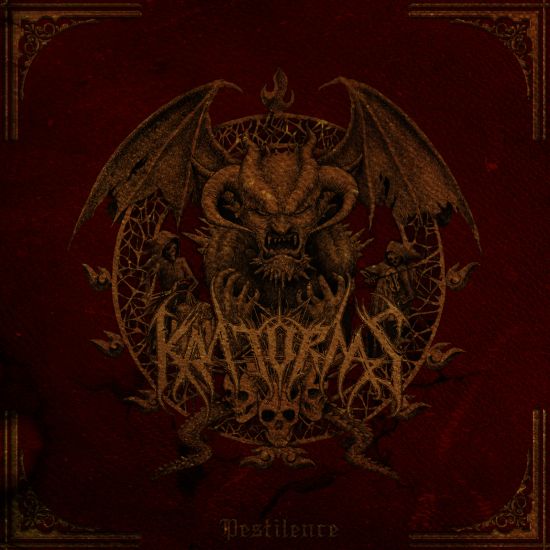 A hidden gem unearthed, what a fucking demo! There better be a full-length album in the works, because I don't think this will be enough to satiate my wanton desire for black/grind done right! Where has this band been all the time, can't be that they've been hiding all this time on purpose, I don't believe it, a two-man squad that'd march straight through a full sextet. Heavy as an aircraft carrier, Kratornas convoke 3 storms of Satanic might on their 2020 demo titled Pestilence.

It really does sound like being attacked by endless swarms of hungry locusts. Each bite more murderous than the last, yet only a taste of Kratornas' fury stored away in some sigil sealed vault, this demo epitomizes perfection in the black/grind subgenre. A carnivorous assault, a cry of beckoning devastation, instruments deliver a smiting blow of dark occult acidic precipitation; an unholy carbonic slime from a black/death/grind kraken upheaved.

The torment is everlasting, as a foul awakening is fetched by the first track, an evil natured explosion titled 'Darkness and Dust'. Contaminating the atmosphere with insidious 1st wave black metal vocals and gutsy guitar rhythms alongside an unrestrained drumming technic, the crushing-tectonic weight of the band is felt and remains active. 'On Dying Aeons' is a victorious war march through the subgenre, fast and raw with a severity amplified through a blast beat brigade and one twisted gravity-blast. However, its most monstrous moment arrives on the final tablet of terror, 'Three Unclean Spirits' that merges specific highlights of Pestilence such as the bold hammering of the snare, the rhythmic complexity of the guitaring and the vocal vehemence heard from the onset.

After hearing Pestilence, an immediate visit to Kratornas' earlier work was made and damn, even though carrying a miserable production as heard on The Onslaught of Battle Demons, the atmosphere they were able to create is bloody wretched and the music itself just matched the inhuman vocals heard. Thus, said I hope Kratornas can follow-up Pestilence with something of that sort but with a better produced varnish and in full length form, 34 minutes or so.

Pestilence appears to be the warning strokes for something more sacreligious to come from perhaps one of the best kept secrets in metal and that of black/death/grind/War, Kratornas!