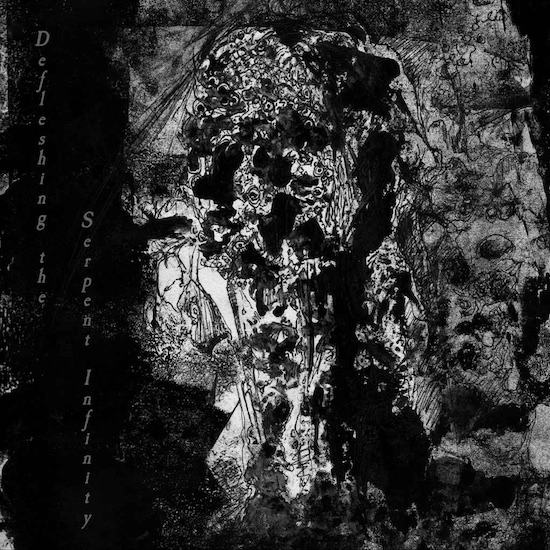 Defleshing the Serpent Infinity marks the somewhat return of 2 mighty forces within the realms of black/death metal. Much had not been heard from Heresiarch since their 2017 debut full length Death Ordinance with only sprinkles of music being manufactured and released since. Their short though highly praised presence on the 4-way split with Serpents Athirst, Genocide Shrines and Trepanation titled Scorn Coalescence gave some hope that the band would follow it up with another full album. Though not to be the case (as yet), they join one of the underground's mystical forces, Antediluvian, whom also have been very quiet since their din in sonicism "λόγος" to foul and desecrate the soil. The last time anything had been unearthed by Antediluvian arrived in the form of "Ancient Meat Revived - A Tribute to Cold Meat Industry" that saw them partake in travesties alongside Grave Upheaval and Vassafor to name a few malefactors. This latest transgression under the management of Iron Bonehead Productions sees the ignition of a partnership that could spring things beautiful all the while dreaded in the future.

Only trickling’s put forth by both factions of fear, Defleshing the Serpent Infinity is a 21-minute reach but an effective one, nonetheless. Two (2) black/death metal cannons and an instrumental of sorts from Heresiarch, while Antediluvian place upon the altar 2 god-tier compositions both ambient and characteristic of the band.

Heresiarch teeters somewhere between death and war metal, their sound has been fairly consistent since their demo days leading up to Death Ordinance and continues to remain the same. 'Lupine Epoch' is signature Heresiarch, thick, aggressive riffs and drumming matched with bouldering vocals pick up where they left off on Scorn Coalescence while 'Excarnation' plays with a devouring death/war metal attitude that crosses over into black metal towards the end of the track. Just another day in the tank on the battlefield for Heresiarch, expect an assault of battery, string and vox just as turbulent as on Death Ordinance.

After the carpet of flesh is rolled out by Heresiarch, Antediluvian sets foot upon it with their desecrated black/death metal commotion marked by a lo-fi unorthodox drumming sequence, a clash of teethy and restrained stomachy vocals, dual chatter and strange cries. 'Slipstream of Levi' holds at heart that unconventional mix of terror-stricken/petrified sounds and technical composure only the likes of Mitochondrion and a handful have managed to adeptly replicate. Mainly black/death metal however, their music has had a fleshed-out way about it that has set them apart from the echo chamber of trend-bands. Sure, many can play, but it all comes down to how its interpreted, and the weight of its substance if any at all. That's where Antediluvian excels, rather than being just another composition, they offer an experience with the music worthy to be passed among interested circles. 'Prelude' brings to a close the brief demon-stration of Heresiarch and the venerated sect of Antediluvian, yet the feeling of something-else lurking the abyss in search of a portal to the here and now rests heavily upon thoughts.