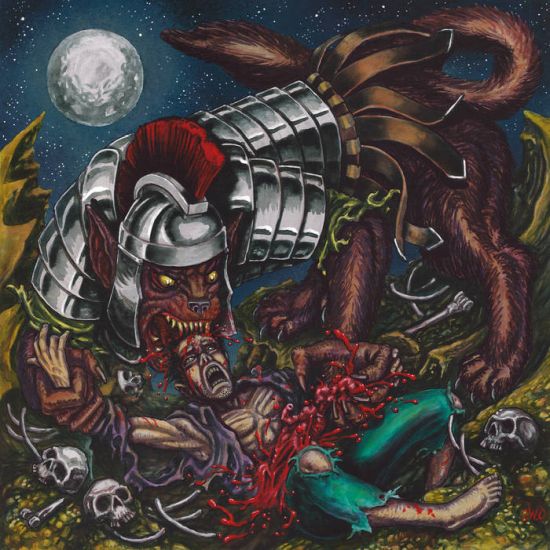 Over the years black metal has often been used as a foundation where bands experiment and push the boundaries of the genre to unique places. However, there are many bands that discard novelty in order to stay true to the spirit of the genre originally created by its many forefathers and upheld by the bands of the second wave out of Norway. What is referred to as "raw black metal" is exactly what it says, a straight to the point, pure and unadulterated black metal, complimented by, you guessed it, a raw and gritty production and sound, the way the black metal forefathers intended. And a new name has come out of Australia known simply as Kommodus.

As stated, raw black metal is exactly what the name implies, and Kommodus; the brainchild of The Infernal Emperor Lepidus Plague, not only perfectly fits that description but with this self-titled opus has managed to make something truly special. The music here goes beyond just standard black metal complete with dissonant and chaotic riffs, blast beats and shrieking vocals, Lepidus Plague also brings various elements of Roman folk music. The album opens with ominous chanting and a heartbeat which are then followed by a somber trumpet and acoustic guitar melody, a truly unique dirge that precedes the what can only be described as a musical bloodbath, songs like 'Where Iron and Blood Converge' and 'Entombed Beneath Roots and Thicket' display the aforementioned "raw black metal" in all its glory. Furthermore, despite how rough and uninviting the music can be (as expected of raw black metal), this is where Kommodus show their true colors. The guitar work throughout the album is surprisingly dynamic while being savage and relentless, the riffs and even melodies push the extremity of the music forward. Interestingly enough, the compositions and the overall sound is very reminiscent of classic thrash metal and even traditional heavy metal a la Motörhead, near bordering on folk metal with some of its melodies as heard in tracks like 'Return to Tribe'; at the midway point the song goes into this very carnival-esque melody and seamlessly switching to an atmospheric bridge and then to a thrash metal like riff, and this is present throughout the album as a whole, and it never feels as if the dreadful Infernal Emperor's music is being plagued with genre cross-pollination. The easiest way to describe this is as simply pure black metal, the influences that range from thrash and heavy metal are present and shine through, but the more folkloric musical elements are also organically integrated and it all coalesces spectacularly.

Another significant element about this album which makes it so unique is the overall atmosphere and how the lyrics and themes complement the music to its advantage. The band's overall concept is very much Roman mythology and the lore of battle, bolstered with the always lovable anti-Christian sentiment. The album has a very unforgiving and overwhelming atmosphere that can also be ghastly and dread inducing, which is appropriate since the music paints the picture of bloody battlefields, blighted woods and burning cities, but it also embodies the spirit of warriors of myth and history, in my personal opinion the album is an exhilarating experience from beginning to end.

The final aspect of note is what will also make this LP a hard sell for many. The production and the sound are very much emblematic of "raw black metal"and while its significantly more polished than the band's demos, the sound is still kept purposefully rough and lo-fi. For me this is to the music's advantage for the reasons I stated above, but I do understand how an album this aggressive can easily scare off people who are novices in black metal, and a small nitpick of mine is that on repeated listens the album can be a bit repetitive, even with its more unique and eccentric elements. It is also a long album, over an hour of music and songs that last from 5 to 7 minutes in length, which can be draining given how chaotic and excruciating the music is. That being said, this is an album worth hearing, as the rawness of the music is but one single feature of a much grander experience and is definitely one of the better albums of this niche side of black metal.