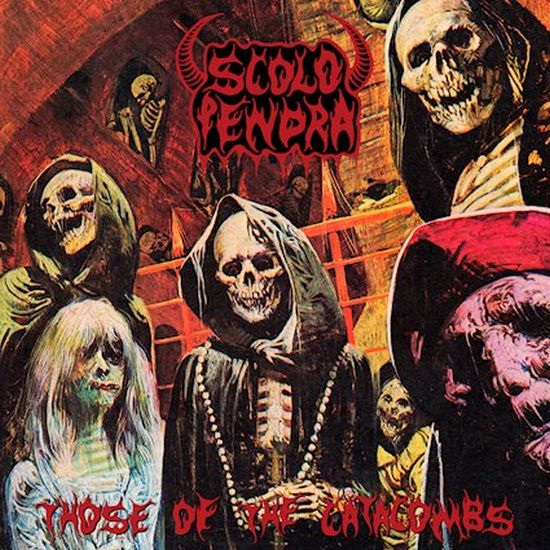 Graven and Kvasir of the occult black metal monolith Abhor really can do no wrong. Going forth with their latest formation Scolopendra, the duo provides us with some horror themed death metal on their debut Those of the Catacombs. Ever wonder what it would sound like if you took the first wave of black metal and modified it with death metal riffs and the lauded Italian occult doom metal synth approach?, then this is your answer. A cold, eerie, yet provocative and violent old school strain of occult metal goodness. This is one for the vinyl, make no mistake about it, Those of the Catacombs is one of 2020's finest death metal gifts to the subgenre and its residents. Plus, when coming from 2 elders of the black arts, why would you even question its authenticity and quality.

Those of the Catacombs bathes the listener in a flourish of brilliant musicianship all round. Whether it be the drumming, riffing, vocals or the undercurrents of keyboard synth on select tracks ('First-Class Coffin'), you'll feel as though you've been swimming in a lake of the genre's best and most valuable wine. Blown away!!, by the muscularity and scholastic framework of the music to be heard on Those of the Catacombs; masterclass embryonic death metal that will have countless awed at the atmosphere and rapine precision of the effort as a whole.

It’s easy to get pulled into Those of the Catacombs, especially through the no-nonsense approach adopted on the album. There are no pointless interludes or 2-minute buildups to songs besides 'The Smell of Cadavers' (that excels at evincing a malefic milieu), only an in and out mentality is put into effect. 'Exhumed Corpse Exaltation' somewhat paints an image of what's to be expected once you decide to thoroughly engage the music. Mostly mid to fast paced with the occasional tempo drag used to develop the atmosphere.

A candid mix of doom, black and death metal riffing directs the tonality of most songs while the drumming tears into a blend of thrash and doom metal territory ever so often. The vocals on the other hand are not the typical tummy growl, instead they're more of a Dagon (Inquisition) styled throat rasp that gives songs like 'First-Class Coffin' and 'Tormenting Dying Nuns' a real menacing, pestilential and sinister vibe. In fact, the latter, more notably possesses a temperature that is plainly put, evil. Via the doomier half with the keyboards emerging on the song, the atmosphere painted by Scolopendra takes a darker descent and plunges Those of the Catacombs into a domain of increased hedonism.

There really is no rest for the wicked in a literal sense here; as progression on Those of the Catacombs introduces 'Priest's Blood Soup' that firstly, flaunts the most disgusting song title on the record and has the only death metal growl that arrived as a refreshing bit of vocal contrast. And as a reminder, has tiny traces of Abhor's and even Disharmony's DNA, that are given heightened emphasis on the final track 'Crypt of Perversion'.

Those of the Catacombs is a sincere ode to old death metal that is somewhat refined through a first wave black metal approach, looming synth sections and vocals representative of a spectral being. This merged dichotomy of embryonic black and death metal could have only been undertaken with success by members of a band the likes of Abhor.