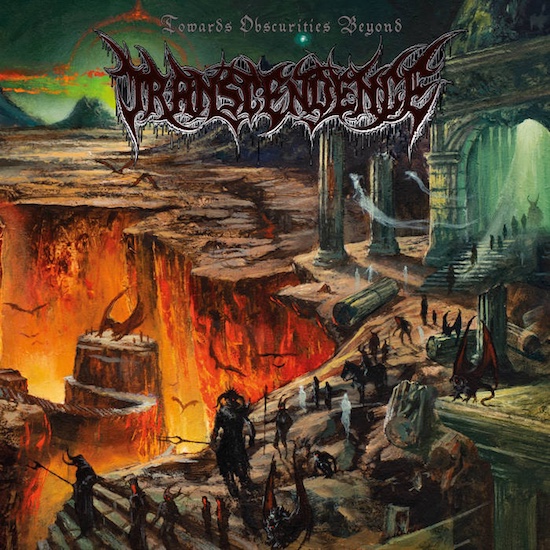 ::   ::  Bandcamp
Type: Full-Length
Release Date: September 25th, 2020
Label: Blood Harvest
Genre: Black, Death, Thrash
1 Infernal Resurrection
2 Majesty Of Chaos
3 Towards Obscurities Beyond
4 As The Maggots Feast
5 Drowned Screams Of The Departed Souls
6 And Darkness Shall Be
7 Ravens Of The Burial
8 In Silent Procession

Can you remember the last time you read the promotional package for a metal album that actually lived up to every word of outlandish hype? I can, but only for very few releases. For Blood Harvest Records it manifested in the form of Cryptic Shift ("Visitations from Encladeus"). Now I can add Transcendence to that list; the death/thrash LA demolition unit on their debut album Towards Obscurities Beyond, stitches every sentence of beefed-up hyperbolic praise into their first full-length following a slew of EPs and a lineup alteration. For a record that has so much transpiring, it somehow all works without negation. Listening to Towards Obscurities Beyond is like staring into the guts of a mechanized portal and being starstruck when analyzing the efficacy of every gear in motion, every electrified piece of wiring and motor concurrently linked in operation.

Being signed to Blood Harvest Records means you must be doing something exceptionally better than many other bands; or something others aren't doing that you make work within metal. Transcendence appears to be doing a bit of both. Seamlessly merging melodic death metal with thrash and 2nd wave black metal in a serpentine rollercoaster of festering aggression and poignancy, the band somehow strike gold in this milked to dried tits mine we call melodic death metal.

'Infernal Resurrection' doesn't hold on to melodicism strongly, but is a beginning; as with each passing moment, the song's path is altered to exhibit diversity within their compositions. At first, it sounded like a mix of 1st wave black and death metal, then without warning, a sudden change takes place that sends it pelting into Swedish death metal territory (minus the hm2 distortion). This song is a unique introduction to the band, it's mostly a riff salad within the lead department that fashionably masks Transcendence's direction. The contrasting vocals that toggle between a Serpenth-esque (Belphegor) snarl and an overpowering death metal growl adds to the appetiser of sorts before the big meals are served.

By the second track, 'Majesty of Chaos' , you still are given a very minimal portrayal of Transcendence's path on Towards Obscurities Beyond that elevates the expectation of something grand lurking beyond the veil. Not to be mistaken, these two preceding songs are very strong considering the level of musicianship showcased that mirrors a seamless assembly of styles ornament to multiple genres within metal. However, they do indicate much better to come. Therefore, by heightening the melodicism in their black and death metal formula overtime, Transcendence manages to keep the listeners buckled-in their seats for the full ride despite not quite knowing where it's all heading.

And for your patience, you are greatly rewarded with a pinnacled piece of melodic death and black metal merged with a second wave black metal twist. 'Drowned Screams of the Departed Souls' it all makes sense now. Following perhaps the best acoustic intro of metal in 2020, like a dopamine blow, your mind rushes, you feel like you've won the lottery during your time spent with this beast of a song. It brings together all assets in an organised fashion; from the gorgeous artwork sculpted, to the magnificent musical masonry on Towards Obscurities Beyond, you get that sense of completion achieved.

The bulk of the work, the labour put-in pays-off, as 'In Silent Procession', bids you farewell with musicianship that is reflective of the overall effort manufactured on the record. What you'd notice here is a more convicted melodic death/thrash metal approach in comparison to the first 4 tracks; that while being one of the stronger melodic entries, still rubs elbows with stern death and black metal elements. Thus said, the final 4 tracks appear to be a nod to traditional/respectable melodic death and black metal the likes of Dissection or Exhumation.

Towards Obscurities Beyond truly shines as a progeny of metal that models itself after competent albums within the genre mostly of the 90s.