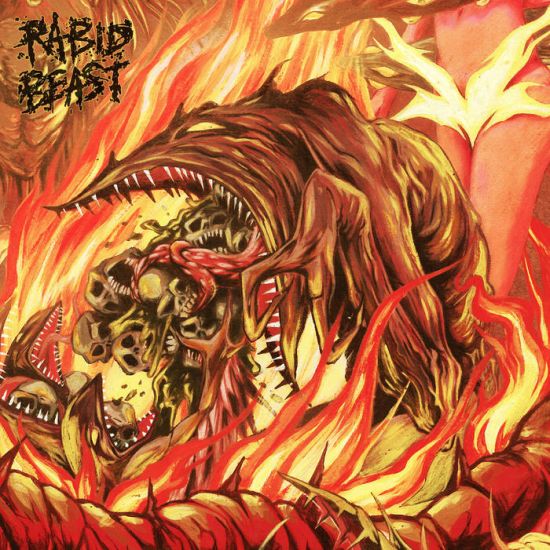 They say that everything old is eventually new again; no other genre of music has stretched that little tidbit to its illogical limit like metal has, but I digress. Every now and then you stumble across a few bands that capture 'that' sound, the "archaic" feel that all of us oldsters recall fondly – hearing the dissociative chords of our own personal hells and utopias for the first time, feeling strangely in sympatico with other like-minded aliens.

Chicago's Rabid Beast is a straight-forward heavy / thrash experiment that couples some pure 80's thrashing riffs and hooks with a very pained, almost beleaguered vocal style that fits the EP (simply titled Rabid Beast) perfectly. If I was to try and describe this style...it's not Slayer-esque in terms of blinding ferocity or dark feel, but if you picture early Forbidden, Forced Entry or early-80's Anthrax with some anger and balls you might be on to something (before the 'happy thrash' disease that killed one too many bands). Even that last comparison only applies to a hook or a general feel here and there; this is an EP more focused on the power of the riff and less on the speed of the delivery. It simply doesn't come more old school thrash than this.

Vocalist Paul Gillis (Morgue Supplier, Drug Honkey) and Eric Bauer (ex-Morgue Supplier, World of Shit) have managed to pull their collective influences from deep within the ancient wells and manifest this destructive little EP that hold up against any of this so-called “New Wave of American Thrash Metal” or whatever silly acronym the resurgence goes by these days. While most of the bands attached to that tag are a pale rehashing of an often-one-dimensional spectrum of the grander scale, Rabid Beast simply puts out four quality thrash ditties and summarily crush your skull with a no-frills approach to heavy metal. If you are at all familiar with Paul Gillis and his other bands, you'll quickly understand that the lyrical approach will not be pedestrian pictures for the weak-willed – the murals painted here are very socially aware without preaching a cause, potently warning of things to come in darker, more alienated times. You should be a thinker to get the overall feel of what Bauer and Gillis are doing here; it's music to bend the parameters of your mental frame, and it's a welcome respite from the new, accepted 'norms.' Even when he's calling out the pissants and prima donnas in the scene, you feel his passion and honesty like a claw hammer to the sternum. Glorious pains these are....

The first track, 'Decline Into Disorder', sets the vicious tone right off, but it doesn't get lost in it for its own sake. It's a perfect opener, and drifts easily into 'Existential Malestrom' that treads the invisible line between a slower trash assault and an occasional necessary crescendo that wades back and forth with such ease; it creates a very convoluted feeling, and it's amazing – probably my favorite track. 'First Among Equals' is the fast-paced crunching riff machine that takes Gillis' vocals to a new height (with some added vocal brutality from Bauer in the first half) providing a passionate delivery that simply can't be dismissed as rudimentary by any stretch. The styled yell delivered isn't necessarily new, but it's well done and surely a long-lost effort in the thrash medium. The guitar also courtesy of Bauer on this track is amazing, disseminating that familiar speed at all the right intervals, while then casually showing the "note-power" of the 80's sound in its updated glory. In fact, Bauer handles all of the instruments here, and he does one hell of a job taking this old fart writer back to those seminal years before MTV and big-label saturation saw the genre slip into commercial sterility. 'Green Room is Red' is the 'fun' track where the mouthy promoters and 'rock star' elite in any local scene can take their lumps as the fantastical violence unleashed upon them soothes and assuages the many of us who have had to deal with such cretins in our own way. This is about as close to dark humor as the band comes, so enjoy it and remember: soundchecks should ALWAYS begin on time, lest you be dealt with swiftly and accordingly.

Ending this EP with a track by from one of the most underrated bands in the metal genre was choice! 'Overlord' by Canada's Infernal Majesty is nothing short of incredible. While retaining every millisecond of the original's velocity and power, Rabid Beast plows into this track like a poisoned herd of hipsters scrambling for a way out of the latest Facebook metal CD group. Covers sometime suffer in some large or small way through the wanton dismissal of attention to the original details, but there is none of that here. No quarters given, no short-cuts implemented, no watered-down campfire sing-along – this is a true homage to the masters, and I'm sure they highly approve. Nothing more need be said here about this.