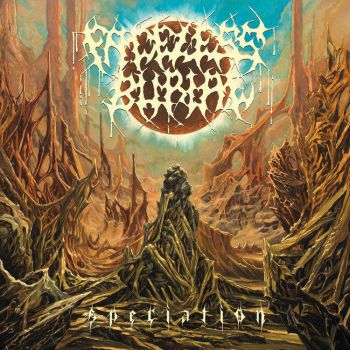 Everytime a new band comes along and changes the landscape of its genre, there is, unsurprisingly, a flurry of bands that flock to the studios to put their own spin on this newly introduced formula. There is, of course, nothing wrong with this - in death metal specifically, it's a nice refresher from the countless bands that try to sound like Entombed and Dismember, all while never even holding a candle to the amazing works of those two. The band in question is, of course, the newly introduced Blood Incantation that has taken the death metal world by storm, and with good reason. The best way to describe their sound in one simple sentence, is to imagine what death metal would sound like if you took a little sprinkle of every one of its subgenres and put them all into one well-crafted package. Because of this newfound sound, it should come as no surprise that since their 2016 debut, a number of bands have all tried the same formula, and with great success. Burial Invocation, Warp Chamber, Cosmic Putrefaction, and many others I'm sure I haven't heard or have forgotten about. However, one of the names that does not get enough recognition with their newest album, Faceless Burial, may have just outdone their contemporaries by a great margin.

"Speciation" is a chaotic mix of a number of bands, a putrid cacophony that brings to mind genre stalwarts and underground legends such as Gorguts, Suffocation, Incantation, StarGazer, Demilich, Opeth, Death, and even The Black Dahlia Murder. Yes, the influences are that expansive, even if the band didn't directly incorporate these influences into their music. It destroys everything in its path with a menacing compilation of death and progressive metal riffs, intertwined with a tight and heavy production that suffocates the listener. But, don't be alarmed, this isn't some noodly bullshit (though I love that stuff too), these are genuine technical riffs that don't overwhelm you with "bro look at how many time signature changes I do!" It's a progressive edge that aids the cavernous and bludgeoning death metal that acts as a foundation for the technicality to shine.

The songs are very well structured, never becoming too repetitive or straying too far off from the core of the music to the point where it ends up meandering. The solos are meaningful and aren't just walls of noise, and often elevate the music to a new level whenever they come on. The dissonant riffs that remind heavily of "From Wisdom to Hate" era Gorguts are some of the best on the album. It's rare to hear bands incorporate riffs of this style in a listenable fashion that's easy to pick up on after just one or two listens instead of five or six. And that's what's great about this album; not only is there a little bit of something for all types of death metal lovers, but it's all packaged neatly into an easily digestible format that even people just getting into the genre can find themselves enjoying. You don't need to be an expert in the genre to enjoy it, but it also doesn't just appeal to newbies and has things for seasoned veterans to appreciate. A strikingly perfect balance that so few bands have managed to achieve in the 30+ years of death metal.

I must say the only downside of this album is that the vocals are plain, boring and don't mix with the music much at all. They're low as shit, but they don't really do much more than be background noise. They could have definitely been better than this, but it's not doing much for me the way it is now.

"Speciation" is one of the finest slabs of death metal to be released in 2020. In a year filled with a bunch of unsung gems, it would seem Faceless Burial sits atop them all. It's catchy, heavy, technical when it needs to be, groovy when the time is right and hooks you in almost instantly with its precise musicianship and relentlessly heavy riffs. As stated above, there's a little something for every type of death metal fan, and it's just an all around great album that will succumb the listener into its dark atmosphere. A furious combination of melody and brutality that is often left out in modern death metal.