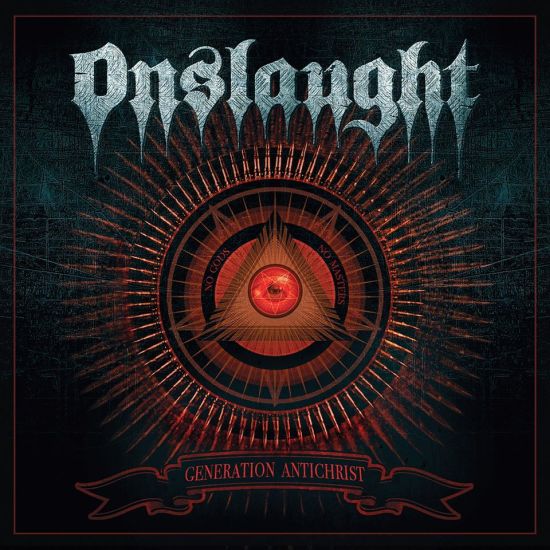 I never felt a great admiration for Onslaught. I remember having listened to their The Force album once just because I found it in a list of "the best albums of thrash", but to be honest, I was not totally amazed by their sound, so I lost their track. Now, in quarantine time, I realized they had released a brand new album and as I currently have not so many interesting things to do, I said "why not?" and gave them another opportunity, and I'm happy for having done it.

Now, to start, this is the only Onslaught album that I have heard besides The Force, so I have little (or no) knowledge about the context, history and, overall, the evolution of the sound of the band, so I'm judging just the music and nothing else, and you know what? I enjoyed it. Pretty much, I'd say.

Generation Antichrist is a great modern thrash album. Every song feels powerful, the sound is really heavy, and the effort put to write each piece is notorious. There are some fast songs like 'Strike Fast Strike Hard' and 'Religiousuicide' that will be the delight of moshers live (if they happen to play it live once) and some others which are more mid-paced, but crushing and devastating like 'Bow Down to the Clowns' and 'Empires Fall', but my favourite of all is 'Addicted to the Smell of Death' owing to its intense and headbang-worthy chorus, as well as its drum rhythms.

Talking about that: the instrumentation and the production is excellent; not outstanding, but it works very well to make a neat and strong sound. James Perry is a great drummer, and his work is brutal; the guitar players are really competent and despite not being great shredders, they perform a good deal of memorable and gripping solos. David Garnett's voice is good, but it is nothing that I really love; I don't know how different their previous singer’s voice was, but this one works and feels pretty aggressive. Despite not being too notorious in the mix, Jeff Williams makes a good job giving more strength to the music, and for me, that's what a good bass player does.

The album is really economic. Without taking into account the first track of the album (which is more an introduction rather than a real song), the album lasts 35 minutes, so with this album, you will have a good package of fierceness and power to listen to during your free time.

The only bad point I'd point out are two of the songs of the album. I don't know if it's just me, but the title track and 'All Seeing Eye' were the most forgettable songs for me. I felt the choruses of these songs bland, more compared to the rest of the songs, but maybe it's just my perspective. Even though, I wanted to mention it.

To conclude, Generation Antichrist is a strong thrash release. It's entertaining and you will possibly want to move your head while listening to it. It's not the 8th marvel of the world and I'd not put it between the best albums of the year (first of all, we need to listen to Heathen's upcoming album to know it), but it's undoubtedly a good recommendation if you look for a good thrash album during the quarantine we are passing through right now.

Generally speaking, line-up changes are something very ordinary that do not affect the appearance or the success of a band. A formation has a new bassist? Okay, eh… what was the name of the old one? Everybody can be replaced – but as always, exceptions confirm the rule. Zetro did never perform badly, but Paul Baloff (R.I.P.) sang in a class of his own. Jason Newsted and his successor are surely excellent musicians, but the vibes of Cliff Burton (R.I.P.) cannot be reproduced. And in the case of Onslaught, we are confronted with a new vocalist who tries to follow in the footsteps of Sy Keeler, the brilliant singer who left Onslaught. The best albums of the band are closely connected with his name (The Force, Killing Peace, Sounds of Violence), the worst one was released after his first departure. Steve Grimmett and the other guys jumped on stage with the lukewarm In Search of Sanity and the result was a disaster. 18 years of silence followed.

Thank God, this time the once fickle band did not modify its style. The music on Generation Antichrist is aligned with the material of the albums the more or less legendary group released since 2007. But I miss Sy. The new dude sounds solid yet interchangeable and the re-recorded version of 'A Perfect Day to Die' shows blatantly that you cannot buy charisma at the store next door. Sy's voice gave the original version the final touch, now I am listening to a song with stirring riffing and unimpressive vocals. However, the music itself has a more than satisfying degree of aggressive power, the conservative song structures work, the drums motivate the guitars to high velocity and headbanging is only recommended to those of you who can be happy about their very stable health. I am slightly surprised about the comparatively short playtime of 38 minutes, but that’s no big problem. I also do not want to grumble too much about the sound, even though the album is not far away from a slightly sterile appearance. Onslaught's transparent and clear sound does not cross the line into the synthetic regions and, of course, that's a good thing.

The five-piece is not totally immune against self-quotation. For example, 'Empires Fall' and the beginning of the (very strong) title track show trace elements of 'Code Red' and further sharp riffs seem to celebrate their second life, but at the end of the day, everything remains in acceptable regions. Given this situation, it is all the more enjoyable that songs like 'Bow Down to the Clown' or 'Addicted to the Smell of Death' work immediately. These pieces are typical Onslaught rockets that can cause a long-lasting fire. Moreover, the entire material boasts with dynamic and energy. This is definitely no output of a band that has begun to bore itself, although the stodgy artwork indicates something different. So, all in all, the band is still in good, sometimes even in very good form. And, as mentioned above, line-up changes are no big thing… but maybe Sy Keeler likes to come back?