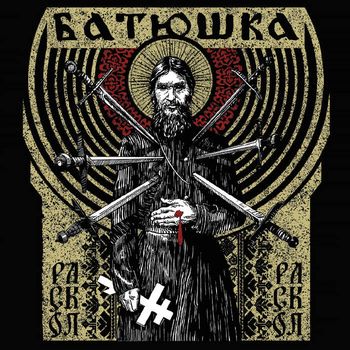 As I wrote on my review of the first single for this EP, Bart Krysiuk's music as "Batushka" is just a poor man's imitation of the original version of the band's first album "Litourgiya", probably in an attempt to trick people unaware of the situation behind this project (furthered proved by Bart using the older "Batushka" logo), the music in here sounds indeed like the b-side tracks that didn't make the cut on "Litourgiya", although one slightly positive thing I can say is that production quality doesn't sound nearly as insipid and over-polished as Bart's last album; "Hospodi", whatever money that hasn't gone to the legal battle over the Batushka name was at least put to make the album sound decent enough. The same "I guess that's fine, but whatever" faint of praise goes for the artwork and the length of the EP, at 30 minutes it’s at least a mercifully quick sit through.

However, a decent production cannot salvage this EP, the larger issue isn't just how the music and even atmosphere sounds like a shoddy recreation of "Litourgiya", but rather how this whole EP feels like the throes of a desperate man, trying his hardest to keep something that was never his, there really isn't much I can say about the music beyond stating "it sounds exactly like 'Litourgiya' but boring", and the short run length also makes it obscenely unmemorable, the music goes into one ear, and out the other and that's about it, it might as well be royalty free AI generated polish black metal but with church choirs. Even if you want to ignore everything about the Batushka situation, the truth of the matter is that Bart's music on his own devices and direction just sucks, and not even in an interesting way, his music is just derivative, boring, forgettable and not worth getting angry about or to laugh at, as proven by how inconsequential his original band Hermh was, how inessential his label Witching Hour Productions is, and how forgettable his "Batushka" records since 2019 have been.

In my aforementioned review of the first single, I mentioned how this whole sham by Bart is not worth getting angry anymore since most people get the picture already and the fact that this EP was rushed just over a year as Bart's last album means that eventually the Polish courts will rule in favor of Derph Drabikowski the actual founder and mastermind of Batushka and at this point Bart is just trying to squeeze a few more bucks before his literal Day of Judgement. Basically, this is the last word on my end about Bart Krysiuk and whatever other grift he wants to pull, hopefully next time I talk about Batushka will be for Derph's third album.