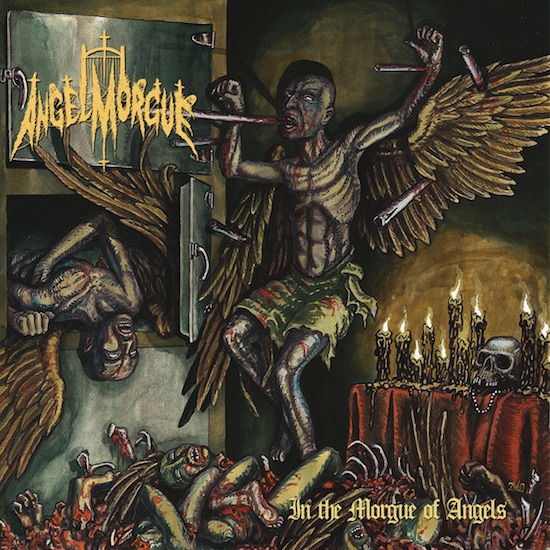 Angel Morgue knows what is up, coming off of a highly acclaimed demo, they return with utmost confidence to play in the foul regiments of a full length. What we got here is a potential top 10 death/doom album of the year competitor. In the Morgue of Angels, unholy fuck!, sick to the core underground death metal; raw with a potent effluvium, these guys leave no stone unturned as they attack from the lowest orders to the highest ranked in the hierarchy. Eight tracks of infinite malevolence, rooted in all that is death/doom metal, nothing more nothing less, In the Morgue of Angels sounds like it was recorded by veterans and with purpose.

Death metal with an abrasive texture like skin infected by a leprous ailment, songs on the record play on the borders of extraneous motions via the sharp slice of snarls and spontaneous outbursts of blast beat drumming to peer the vocal harshness. The growling is dark and abyssal, deeply enunciated and cavernous. Guitars fluctuate between the lower levels of the mix and appear high when the music requires accentuation and punctuation. 'The Sigil and Key' for example goes from a maelstrom of high energy blasting to a melodic doom metal monument of lament via poignant riffing adding a melancholic coating to the brutality. Deadeye concentration in contrast, a win in my book for Angel Morgue.

A very dreary tonality prowls-around In the Morgue of Angels with 'Lust Murder' and 'Cosmic Torment' sanctioning rhythms and tones ripe with thematic connectivity. Sonically speaking to the witness, applying theme music to go along with the subconscious decline, a procession achieved through expert instrumentation. "To kill you is for lust", is a nuanced provocation if anything that invites the listener and all witnessing the insane indulgence down the void of dark introspect. Angel Morgue not only compendiously piece-together lyrical puzzles but project a sense of torment whilst doing so. The way the band drags the listener around their circus of horrors is just impeccable given how neatly the scare is implemented and effectuated, gradually building upon the foundation set via 'Lust Murder' to extracting and amplifying more noteworthy elements to be featured on following entries.

The psychological hazard is exacerbated with 'Cosmic Torment' and 'In the Morgue of Angels' delivering the thrust of finality. Flammable riffing, corpuscular vocals and the rhythmic thump of torture seal the deal on this record. Despite having not mentioned some songs, I can't think of a single weak or underwhelming piece. All reek of abhorrence while offering stellar musicianship telling highly of the sacrifice and dedication put into creating this monster-piece. Also, it should be noted that the recordings on In the Morgue of Angels sound as though they were all done live and with only a slight brush-up of production, in-turn retaining an organic quality. This is cream of the crop death metal Angel Morgue have mustered and comes off as very boastful given they only have a demo prior to In the Morgue of Angels. Essential purchasing!, get this on vinyl preferably or whatever other format it is available on, In the Morgue of Angels will go down in history as one of death metal's finest hours.