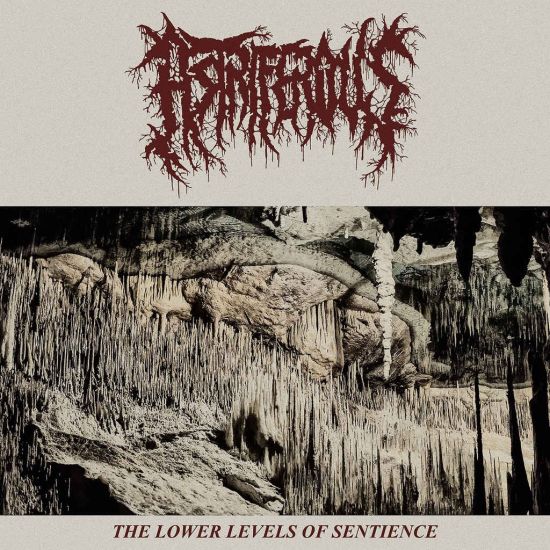 This EP premiered just a bit ago and I’ve got to say I’m delightfully impressed with the upgrade on the band’s sound compared to the demo. While it’s exactly the same idea, death/doom with scandinavian influences and cavernous production, it’s better executed here. The atmospheric and drone dimension of their trademark sound is still present but the songwriting is way more dynamic; the riffing is fairly simple and old school but interesting to the ear because songs get a resolution now, with the intense parts that are technically a little bit more demanding on the strings. Even though the main themes of the songs develop over slow and mid paced tempos, there are more blast beats or aggressive and fast tupa tupa beats, the use of the cymbals is a little bit more prominent and classy, the same with the rolls and the breaks. The double hammer on the bass drums is barely required and scarcely used.

The bass guitar’s distortion can be noted more as an individual instrument but it never really drifts away from the rhythmic guitars, which is not necessarily a bad thing. The raw tone of the low end is so rotten that it adds an awkward but satisfactory, flatulent and crunchy texture. The vocal play is probably the best part of the record and the band in general, not because of how br00tal the gutturals are but for the clarity of the diction and the easy flow of the vocalization, that give the music a human soul rather than sounding inhumanly deep (The effect it provokes is very deep though). They have three vocalists, the bassist and the couple of guitarists.

The rhythm section of the band is simple but effective and with such a good mix every instrument can be fully heard individually. The guitar tone is very acid and thin, like the shadow of a ghost... if something like that actually existed. Despite having an elusive edge inherent to the excessive and dismal reverb, the processing is so nitid and solid… I read Dan Lownes was in charge of mastering duties, so probably he has a share of responsibility for that. I recommend this to anyone wishing for a slow death, which is guaranteed.

Rarely a day goes by without some new death metal band living up to the promise of delivering old school mishaps. Tell me 'Do you know the way to San José?', you might want to go there sometime after you're done hearing The Lower Levels of Sentience. Astriferous hail from Costa Rica (as you have probably figured by now), and they play a pulverizing style of traditional death metal. However, woven deep in the fabric of this quartet is a death/doom metal flicker that raises every now and then for the duration of The Lower Levels of Sentience.

Crossing paths with Incantation and Cannibal Corpse on their way to The Lower Levels of Sentience, Astriferous borrow some of the bands traits and give them rigid incorporation. NOT to be fooled, Astriferous arrive with their own penchants aiding the fluent formation of the record. At the glance of an eye 'Ghost Universe' takes the listener on a somnambulic journey through the ethereal with a collage composed of pinch harmonics, diverse breaks into thrash metal and blast beats scattered throughout the track.

Astriferous then through their nocturnal soundscapes, take things up a notch on 'Exercises in Tantric Sorcery', arguably their best moment on The Lower Levels of Sentience. A death/doom metal session of therapy spiraling into the groovy realms of the subgenre with a gloomy overcast of stygian vocals hovering atop the combative thunderstorm of lethal drumming and riffing in both doom laced and blazing sections.

At this juncture no doubt persists that Astriferous are more than fucking competent at what they do, but to reinforce that feeling of absolute impression, 'Myraid of Grotesquerie' and 'Necrohallucination' cast down the band's most execrable embrocation. 'Necrohallucination' primarily amplifies everything pleasurable on The Lower Levels of Sentence. Jumbling together doom metal movements with those of devastating death growls and frantically played blast beats to conjure an atmosphere summating the album.

Only 20 minutes yet colossal in totality, The Lower Levels of Sentience is inescapable all the while transfixing.