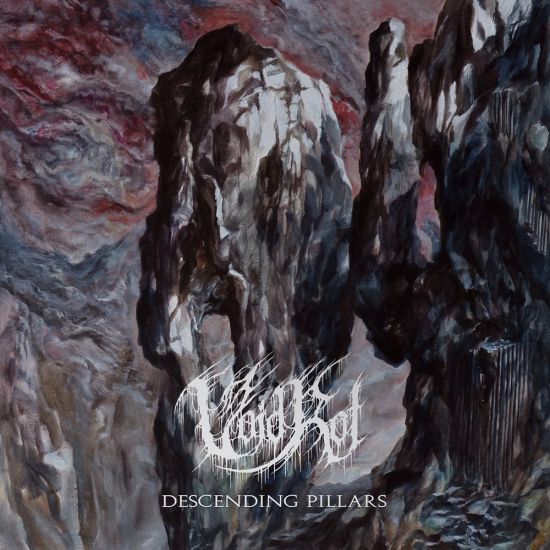 To come from their debut demo to something this destructive is not a surprise to me at least. 2018's offering was a clear indication of the might Void Rot wielded, it was only a matter of time before that power transcended to a full-length commitment. Here be the date the band is set to plunge this whimpering world into darkness, September 11th, 2020. Of an unholy matrimony between death and doom metal, Descending Pillars collapses with the weight of the universe unto those who dare succumb to the abyssal daze. The ceremony of demolition arrives under the management of Everlasting Spew, an establishment that has overseen some of the most corrupt sects within the sub-currents of metal and having Void Rot under their umbrella, only strengthens their influence within the bowels of the underground.

Stand at the base of a goliath, tilt your head upwards and witness it sway as it prepares to crumble; then hear the crack of fright as its foundation can withstand no-longer the force of the sky. 'Descending Pillars' not only sets the tone of the album with its dreary guitar progressions and crushing drums, but submerges itself into a swamp of atmospheric, trance inducing frequencies that'd tell of a band continuing their devastative path since their split with Atavisma. Power chords, tremolo picking, and moderate waves of reverb, crash against the hypnotized cymbal and snare patterns whilst crushingly dense and cavernous vocals give verbal representation of the doom one is awoken to. Void Rot's hand in decomposition is felt distinctly; their properties emerge conspicuously and are put into demolishing motion on 'Upheaval' that applies a black metal technic to the landscape that adds to the idea of a plummeting fall.

Your astral temple is completely clobbered by 'Liminal Forms' that conducts itself similarly to the past two tracks, therefore creating a cohesive and very much connected musical effect as its dark and dreaded heavy thump unifies the seemingly primitive approach to Void Rot's music; with which they accomplish so much that it cannot go without mention; as a band they sound in control of what is being done; with patience being a key factor in the pacing of Descending Pillars.

And as the motor of this death/doom machine rumbles on, a somnambular hypnosis introduces you to a corrosive form of meditation in an attempt to locate and further devour the splinters of sanctity. The Krypts-like sprawling ambiance, guttural-elasticity and precise accentuations in some guitar sections matched with an overall careful (though linear) rhythmic conductivity, establishes this feeling. Bringing me to the point of Void Rot's music on Descending Pillars; there is nothing present on the record that seems out of place; rather, bulls eye concentration and undivided attention are given to the atmosphere evoked. Thus, it sounds as though the music itself was structured around the atmosphere, rather than have the drumming, riffing and vocal oppression be the center of attention. It translates to pieces such as 'Inversion' and 'Monolith (Descending Pillars Pt. Two)', both of which erect and disassemble monstrous atmospheric passages with authoritarian force.

Descending Pillars is Void Rot's most devastating work to date; cleverly commissioned to activate the processes of astral erosion and putrefaction.