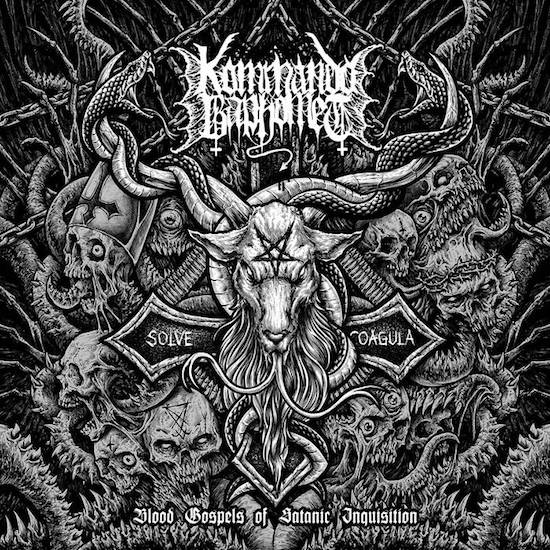 The Portuguese black/death metal terrain continues to grow in power and dominance within metal and Kommando Baphomet's first album is testament to the might of the region's black/death/war musical philosophy. It's easy to see why the monster that is Godz ov War Productions has expressed interest in the extremity from the geographic location. There's something utterly vile about Portugal's black metal that makes them cherished and prized within the lower regions of the craft. Take one listen to Blood Gospel of Satanic Inquisition and you'd begin to hear the distinct sound and feeling it emits in comparison to countless other records part of the sub-genre.

The necessary conditions of war/black/death are met on Kommando Baphomet's debut; however, there is something else lingering beyond the flesh; a contagious specimen that corrupts and moves the recognizable format to a thing still adorned but to greater heights. 'Blood Bible' as though not being a sinister enough track peaks with tempestuous riffing and drumming that in addition, is transported to something far more ominous via it's title. Some of the track names are downright malevolent which is boosted by the blackening lyrical tongues of Vulturius and N.

There's a hopeless overcast Kommando Baphomet brings into effect using only the guitars which is quite impressive when taking into account its only 2 individuals, one Vulturius (drums/vocals) and another N (guitars/vocals). Utilizing a mixture of meaty guitar leads and sharp shredding solos to match with the animalistic and cavernous vocals, tracks such as 'Impious Black Death Order of the Kommando Baphomet', 'Caos Devarador' and my favorite, 'Irongoat Coronat', manifest a sempiternal, gaseous aura of militant occultism and pessimism.

What's really special here comes back to the fact that Kommando Baphomet is an entity that is under the authority of only 2 specimens; yet Blood Gospel of Satanic Inquisition sounds like a fucking army, or better, an inquisition of 200 strong. That's no easy feat to achieve by any standard, however some of this would have to be as a direct result of Vulturius' accumulated experience in reputable bands such as Irae and Decayed. Only now having the companionship of N., hence the music takes on an amplified sonic eruption. As a dark unit, the duo have succeeded in evoking an iniquitous plane while exercising their black/death/war metal demons. And if you think Blood Gospel of Satanic Inquisition is incredible, then grab their 2nd full length album also put out through Godz Ov war Productions titled, Under the Deathsign; want to talk about a leap in black/death/war metal destruction. "Nailed to the Gun"!