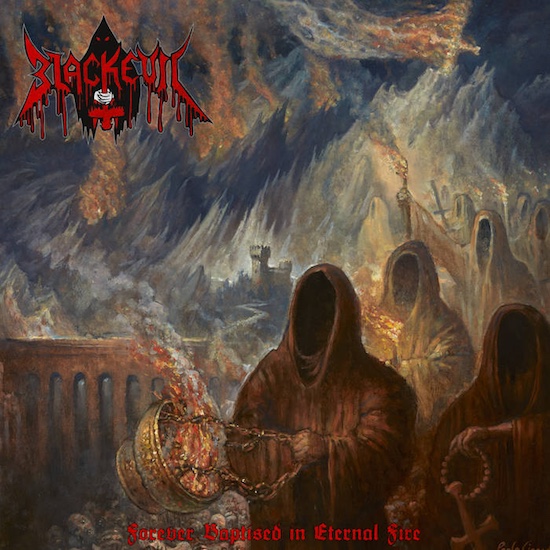 It may be that some metalheads are permanently looking for innovation, but honestly speaking, metal is a very conservative genre. It is still dominated by white men (not to say old white men), the musical frame hasn’t much changed since the eighties of the last millennium and many young bands pay tribute to traditional sounds. Blackevil is one of these units that worship yesterday. Their speed metal seems to originate from a time long gone, but further legions, for example Diabolic Night, another gang from Germany, have already proven evidence that this kind of metal still has its right of existence.

The lead vocals add a blackened touch, the rhythm section plays together tightly and the comparatively light lead guitar gives the album its most characterising moment. Blackevil’s compositions are swift as an arrow, they have a restless nature and all of them possess a melodic element, not intrusive, but remarkable. The material can rely on its energetic vibes. Of course, these are the vibes from 1985, but they still have an impact. 'Black Fire Tornado' – the title shows impressively that the Teutonic fighters are not willing to miss a stereotype – is a fine, typical torpedo. Its fast verses are seamlessly combined with a less rapid chorus. Here the guys demonstrate their core competency, the creation of concise speedsters. On the other hand, two songs cross the eight minutes mark and yes, that’s rather less exciting. These tracks are not bad and feature more or less the same details like the shorter songs. Nevertheless, due to their variety (or heterogeneity) they nearly appear to me like a violation of the band’s tradition-conscious approach.

The mix is clear and avoids an overly modern sound successfully. Just like the music itself, it is based on precise and solid handicraft. Indeed, the songs do not lack substance and especially those who always wanted to know the sound of a bastard that connects Annihilator, Living Death with the second lead vocalist and old Blind Guardian (not only the artwork reminds me of “Battalions of Fear”) will love the album. I am less fascinated. Blackevil do a good job, they have penned lively songs and they score with musical integrity. Yet the final kick is missing from my point of view and a few elements like the squeaky guitar solo in 'Pestkarren' or the overlong intro of the closer are pretty annoying. So this is a full-length for two target groups. Either you belong to those dudes who fight the establishment and don’t care about the opinion of an old white man like me or you must be a convinced conservative – at least in terms of metal.