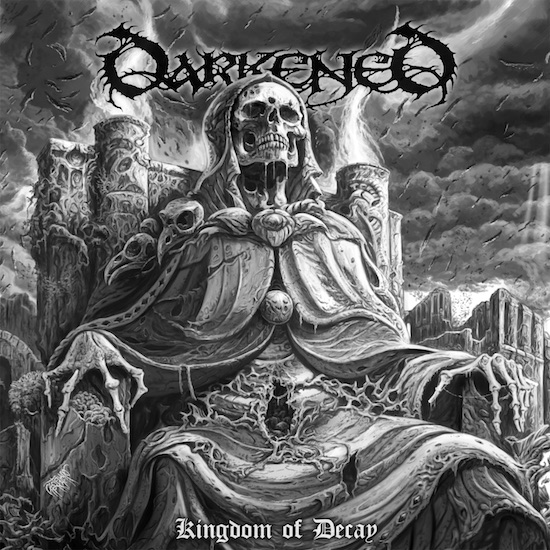 I prefer to set my expectations extremely low when it comes to supergroups. I can't count how many times I've been absolutely letdown by these types of bands that sound as if every musician is stroking their ego restlessly to the best of their ability. Hence, in return what is produced as the final outcome is nothing more than a showcase of each member's talents, not unified music. Thus said, having seen Darkened's Kingdom of Decay appear in the promo box, I was not thrilled to say the least. However, upon finding out Andy Whale of Memoriam and ex- Bolt Thrower would have some input into this (drums to be exact), I was left with no choice but to follow the rhythm of his blast beat.

Adding to the experience of the lineup are Hempa Brynolfsson - guitar (Excruciate), Linus Nirbrant - guitar (A Canorous Quintet), Tobias Cristiansson - bass (Grave, ex-Dismember) and Gord Olson - vocals (Ye Goat Herd Gods) that eventually spell out solid. Along with Andy, the bar by default was set high and guess what, they delivered, in abundance.

From the very moment 'Dead Body Divination' made its entry, in which so much was riding on, Darkened quickly established that they were a band, not a one man stunt-show. As if these guys had been jamming with each other for decades, there is a chemistry detected as this song progresses. With every motion ensued, you'd find a sense of gratitude and respect for one another's space shared amidst each musician whilst distributing their respective frequencies. There's also a calm in-play early-on that wanders throughout Kingdom of Decay following the first real song. Perhaps it's the Incantation-esque opening riff on '1000 Years' that supervises the flow of the album that you'd hear courteously drift amidst mid-paced and a barraging uptempo. Even the synth used on 'Pandemonium' for example, creates a settling effect, that when merged with the primary guitar riffs, helps the music to expand and transition smoothly to the guitar solos.

A Canorous Quintet's ominous melodicism plays a major role in keeping the material adhesive while steadily moving. It is somewhat the building blocks for the guitar solos heard on most tracks such as 'The Burning' where you'd notice how the solos incorporated act as extensions of the more melodic moments on Kingdom of Decay. Some of the best songs being 'Cage of Flesh' and my favorite 'The White Horse of Pestilence' (to name a few) carry a very fluorescent glow in terms of the musical motion that I think is a result of Andy's hard hitting yet smooth and precise drumming that keeps an ear-out for the alternative riff. Meanwhile Hempa, Tobias and Linus' string work invoke an everlasting ataraxia as they fortify the music with mid 90s inspired death metal riffs and a thick throb that adds to the atmosphere on Kingdom of Decay.

The flawless production cannot go without mention; Swanö's mastering matched with Tobbe Silmans mixing gave Kingdom of Decay a booming yet crystal clear sound hence you never miss a note. It's undoubtedly one of the best produced albums of 2020 next to Incantation's "Sect of Vile Divinities".

Overall Kingdom of Decay carries itself as a well nurtured death metal album by big names that plays like a uniform and united effort. For me, the record sounds like a melodic mix of Memoriam, Disma, Incantation, A Canorous Quintet and Bear Mace. And thanks to Gord Olson's goliath-esque vocals you can't help but repeat Kingdom of Decay multiple times.