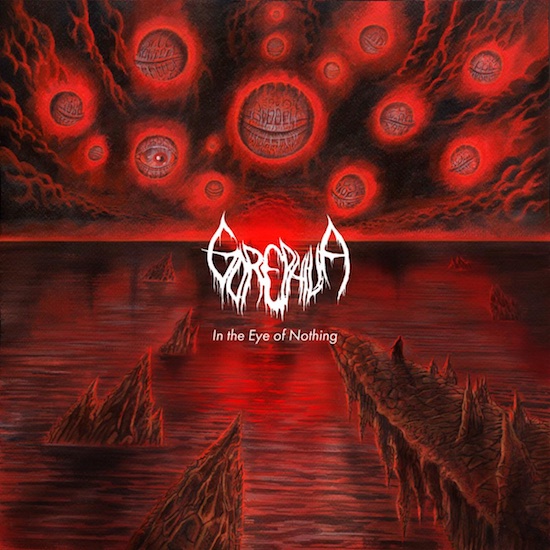 When Henri Emil Kuula (R.I.P) had left us so suddenly I could not begin to fathom what Gorephilia album without his presence on vocals would be like. I knew the band had been sharing a member of Krypts and it was indeed possible to have someone from the Finnish cosmic death/doom stalwart handle the job. However, I was more worried about the identity of the band departing from its ways exhibited on the mind-blowing Severed Monolith that was released through Dark Descent Records and Me Saco Un Ojo back in 2017. That album was way too good for a band that only had one prior full length release to its name; the feeling of elation that would engulf me when hearing tunes like 'Hellfire', 'Blackhorns' and the immaculate, 'Crushed Under the Weight of God' would not leave me for days. Everything about that album exceeded my expectations from an up and coming death metal band. The icing on the cake was Henri Emil Kuula's vocals that gave the tunes a certain character of utter seriousness and darkness altogether creating an atmosphere unlike anything I had heard in death metal at the time. His passing was indeed a devastating blow that I was so sorry to find out yet very angry that another son of metal had been snatched from us. Henri Emil Kuula's work will forever be remembered and revered as some of the finest produce Finland has offered metal.

I didn't hear word about a new vocalist perhaps maybe up until June of 2019? Can't really recall exactly when, but I was very suspicious all the while excited to find out who would be steering the ship. Contrary to my expectations being that Gorephilia would assert someone who has handled vocal duties on some notable album or in some band of a high caliber, however on the contrary, they selected a member from Krypts (Jukka Aho) that to my knowledge (correct me if I'm wrong) has never done any vocals for a professional full length until now. How did this play out? Way better then I had originally predicted. Their new album, In the Eye of Nothing is a damn beast of its own yet it has not harmed the original blueprint associated with the works of Gorephilia. Jukka Aho sort of brought his own character to the already existing recipe of Gorephilia thus giving the album a familiar yet refreshing sound. It's not everyday a new vocalist joins a band of this caliber and is able to perform at a standard that not only continues to hold up the musicianship but also brings a slightly different perspective to the motion of a recording. Hence, as far as Jukka's performance goes vocally, I guess I couldn't have asked for more from a newcomer, that also happens to be wielding the stringed menace.

Regarding the instrumentation, the blueprint of Gorephilia is well intact however, I'm receiving massive Suffocation vibes, specifically from their "Souls To Deny" album; and that's a good thing. This mostly occurs in the various transitions scattered throughout In the Eye of Nothing. Take 'Walls of Weeping Eyes' or 'Perpetual Procession', these songs are structured fairly candid starting out with their introductory riffs but as they progress you'd notice how the guitars leap over into the USA for some of that good old Terrence Hobbs and Mike Smith brute-mance via a stampeding blast-beat technique matched with a venomous excretion of riffing romantia. This makes the album come across as being both dark and brutal given the speed some sections are played and merged with the tone of the guitars that Pauli Gurko handles with great distinction. The doom metal is very much still alive and drummer Kauko Kuusisalo makes the transitions from blasting carnality to weighty punctures seem sublime, and when matched with the support of bassist Tami Luukkonen who uses the stringed-meat-tenderizer to amplify that crushing effect, those death/doom sections are unmistakably pronounced with utmost potency.

I can't think of any weak entry on In the Eye of Nothing, yet at first I was not very big on 'Devotion Upon the Worm' but that steadily crawled around in my consciousness and I slowly began to appreciate what Gorephilia were doing. Just setting you up for 'Simplicity of Decay' that strikes you down with sheer force hence the deep cavernous howl of Jukka guiding the hammer that'd take you through to the final track, 'Ark of the Undecipherable'. Killer fucking track title and even more malignant the musicianship be that sits atom a mountain of sullen eyes filled with condemned visions. Not quite a 'Crushed Under the Weight of God', but it does have its 'ouch you stepped on my fucking feet' moments. I think Gorephilia is in safe hands and there is no need for worry given their output following 2017's Severed Monolith.