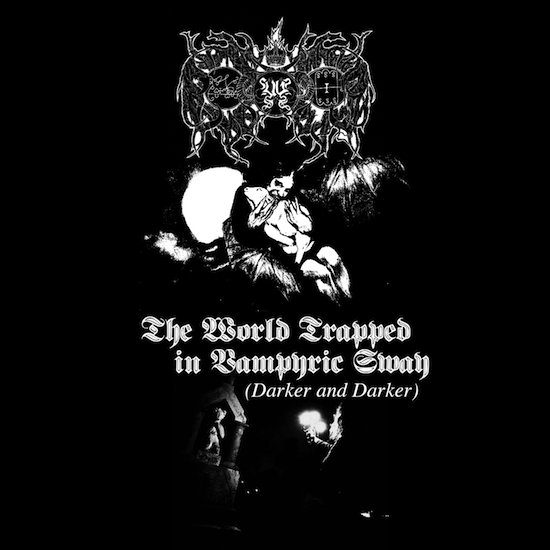 Buy on: Bandcamp
Type: Full-Length
Release Date: September 4th, 2020
Label: Crown And Throne Ltd.
Genre: Black
1 To Love
2 Pummeled Flesh In The Mouth Of The Virgin
3 Forced Genuflection On Adoring Gored Knees
4 Lunar Intrusion Of The Crown Shaktra (Castration Of The Inferior Aura)
5 And I Shall Come To Thee As An Iron Wolf

Formed by one Kane, is the raw black metal band Unholy Vampyric Slaughter Sect. The World Trapped in Vampyric Sway (Darker and Darker) is the 3rd full-length libation that follows a rapid release of material since its existence in 2015. It's incredible how much has been put forth since the initiation of the project; by the lengthy list of releases in UVSS's catalog, you'd easily assume the project had been active for at least 10 years but it seems the drive to create is just too potent to be contained. This could be either a good or bad feature of any band depending on the quality of the music that in UVSS's case is mostly good.

The World Trapped in Vampyric Sway (Darker and Darker) is for the most part raw black metal that uses up the short runtime of roughly 30 minutes, interestingly. Dominated by what one would come to at least expect from a record under said banner, UVSS institutes traditional mannerisms to decent avail; however, there are elements present that are going to be either upsetting or welcoming for those who come into contact with this avant-garde album of sorts. For me it's a bit of both; while I would enjoy the opening track for its trve to the genre approach, the sudden deter from the norm on 'To Love' was generally uncalled for. Given that black metal is a fairly conservative formula, that once invaded by foreign elements, has the potential to negatively backfire; the risk of failure by incorporating some sort of pulse beat music on this track (and majority of the remaining entries) into the mixture is astoundingly high, as the characteristics of black metal and the aforementioned significantly contrast each other. This somewhat blurs the line between exploration and subversion as you're left pleased but aggravated simultaneously.

'Pummeled Flesh in the Mouth of the Virgin' leans more towards the traditional side of black metal, thus dispersing shrieking vocal yells, fast drumming and staple riffing to accompany it. However, it also implements an obstructive break via the electronic pulse beat. By now it seems even more clear that either its intentional sabotage or innocent experimentation occurring on The World Trapped in Vampyric Sway (Darker and Darker). Yet the pleasure to be found here is generally a matter of individual taste, hence, don't be reluctant to give it a try.

Pick scrapes merged with thrash metal could be heard on 'Lunar Intrusions of the Crown Shaktra' that could have been one of the best pieces on the album depending if you're onboard with the experimentation that comes in the form of strange dialogue and more pulse beats. A technical death metal hand is also put to work, that is merged with tremolo riffing, that while used effectively, places a question mark over the album with regards to its identity and direction. However, there's then the finale, 'And I Shall Come to Thee As An Iron Wolf', that stands out as the most consistently black metal track in comparison it's predecessors, despite the beautiful ambient intermezzo. Black doom metal follows it and shortly after its curtain call.

Overall you are going to need an open mind heading into The World Trapped in Vampyric Sway (Darker and Darker). Its short duration ensures you're not overwhelmed and though certain sections may be questionable, the good outweighs the bad to some degree. It is not the best, but certainly is not the worst I've heard; if anything, the record, it's both a nightmare and daydream occurring at the same time.