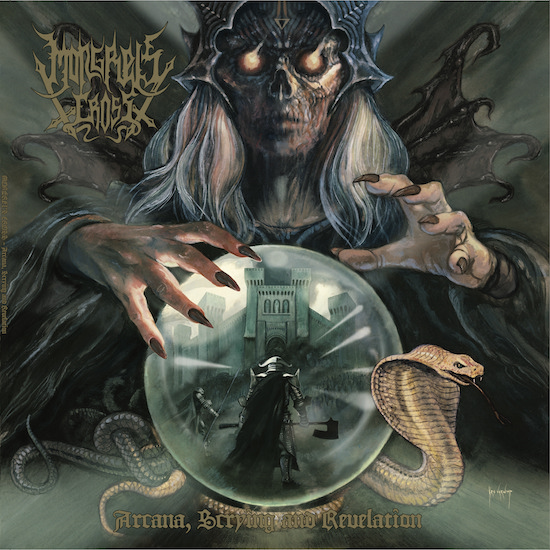 Buy on: Bandcamp
Type: Full-Length
Release Date: November 27th, 2020
Label: Hells Headbangers Records
Genre: Black, Thrash
1 Suffer The Witch To Live
2 Fate Of The Grail Pt. I
3 A Magician's Prayer
4 Fate Of The Grail Pt. II
5 As A Being Undead
6 What The Cards May Tell
7 The Whispering Void
MetalBite on YouTube

The third album of a band is always a special one, the so-called make it or break it album. Either the line-up knows how to transform its experience of the first full-lengths into a mature and robust work or not. Mongrel’s Cross seem to be one of those formations who fail to channel their skills successfully. Arcana, Scrying And Revelation suffers from its unconventional song patterns. To avoid the verse-chorus-verse scheme is not a bad thing per se, but the Australians fall victim to their own ambitions. Too many parts meander aimlessly and, aggravating the situation, many powerless sequences show up and sometimes they kill a lot of the force of the songs, for example the somewhat cautious solo of the opener.

No doubt, Mongrel’s Cross have integrated a lot of melodies which stand in contrast to the malicious (yet pretty non-expressive) nagging of the vocalist. Melodies are also usually no problem, but here they lack expression and might. There are no majestic harmonies, no morbid sounds, no catchy elements, just a few proper fragments. It would be unfair to say that the Australians do their job by numbers, but at the end of the day, the songs rather form a tiring mishmash than strong single elements that form an equally strong full-length. And, as much as I regret it, the single cuts are simply too long. To write compact tracks was definitely at the top of the agenda during the creative process for this record.

Considering the usual straightness of the black thrash niche, I am listening to an almost progressive work. The natural snot that characterises the bastard genre is not completely missing due to the vocals. Nevertheless, in view of the high number of breaks and the integration of traditional, almost Maiden-esque harmonies, the album cannot be compared with the majority of the Norwegian, German or Australian black thrash works. Deströyer 666 may be a point of reference, but the energy of songs like 'Wildfire' is more or less totally out of reach for Mongrel’s Cross. They rather create a tame fire... The fact that the production also lacks edges and corners does not make things better. Summing up, a few captivating parts like the instrumental section at the beginning of the closer are not enough to make Arcana, Scrying and Revelation relevant.

Australia are no strangers when it comes to extreme metal. From cult bands like Sadistik Exekution, to more modern acts like Nocturnal Graves (and certainly many could argue that the Australian metal scene were the ones that popularized blackened thrash metal) and bands like Deströyer 666 or Gospel of the Horns; but while those bands have their place, today we’re focusing on Mongrel’s Cross, and their third studio album Arcana, Scrying and Revelation, released through Hell’s Headbangers.

The band got their start in 2009 and have had a number of releases with 2 full lengths that caught some people’s attention. In particular their sophomore record Psalter of the Royal Dragon’s Court where the band displayed what they now refer to as “arcane heavy metal”, which in a nutshell is their brand of speedy blackened thrash but with some catchy hooks and melodies that borrow more from late 70’s heavy metal and NWOBHM than actual black or thrash and a lyrical focus on ancient witchcraft, occult magick (yes with a k) and arcane knowledge. This is no exception on this new record, in fact the band have doubled down on those elements with some surprisingly good results.

The first thing to notice and major development for the band was the recruitment of the late Absu's frontman Proscriptor McGovern on vocals. His unmistakable shrieks and growls helped the band to fully crystalize and even perfect the sound they had on their previous record. However while McGovern is a welcomed addition to the band, he isn’t the only one who makes this album shine. The guitar work of Grand Mongrel continues to be the foundation of the band’s sound, if you want a black or thrash, or in this case a blackened thrash metal album with riffs, melodies, hooks and shred to spare, Grand Mongrel’s got you covered. This album is even more melodic that their previous record and features more solos that range from the frenzied to the progressive, and that same level of dynamic range can be said of the bass work of Goet who also handles rhythm guitars. The greatest strength of this band’s style and sound really lies in their string section, and it's no wonder the band describe themselves as “arcane heavy metal” since the influence of black and thrash is used more on the vocals and drum work.

Speaking on the drums, new member Wretch is no slouch, as his drumming which switches from the blackened blast beats to the complex thrash double bass and fills, complements the more esoteric guitar work. He successfully manages to ground the band’s sound without feeling out of place or as if he’s trying to overshadow the guitars and bass. Some could say the drumming here is just standard for blackened thrash but then again, it does the job perfectly and given how the band’s sound is based around the guitars and bass the drumming doesn't really need to be flashy or overly complicated.

Overall Mongrel’s Cross continue their stride of good albums and seem to get better with each new album, but there’s some issues I do have to point out. One of them is that the band have certainly found a nice little comfort zone for themselves, while each new album shows some progression for them, they’re still treading the same tried and true path. Make no mistake there’s still a lot to like here but it feels like the band take their music one step at a time (yes, if it ain't broke, why fix it?) but as it has been seen in many other bands, sticking with their one trick has diminishing returns, fortunately these Aussie warlocks haven't succumbed to that, yet. Another issue I have is the album’s length as it left me wanting more, and not in a good way, since as soon as I settled on this album’s groove, it ended, and it ends very abruptly I might add. All because the final track doesn’t really, sound like a grand finale, aside from sampling some creepy bestial moaning in its first seconds, it’s also the shortest track of the album. And finally my last issue is how some of the songs sound similar to each other and the album is fairly repetitive near its second half, this goes hand in hand with how quickly it ends and that last song not feeling or sounding like the band is capping off this record with a bang. But then again those are my issues with the album and I share them not to dissuade people from listening and judging for themselves but as a disclaimer to newcomers, because all in all Mongrel’s Cross are definitely a name to reckon and worth getting into.