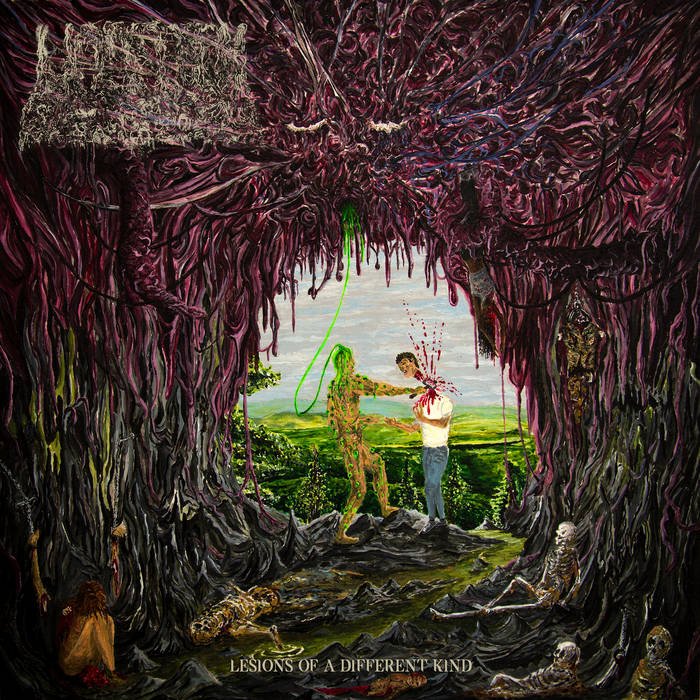 Undeath has become one of the staples of modern death metal, right from the get go when they released their first two demos back in 2019. I had them on my radar despite never getting around to that early material, but when the debut dropped a year later in 2020, I decided it would be a good time to give these Rochester lads a listen. Needless to say, they've remained consistent in my listening experiences with a handful of great songs on just this album alone.

Lesions Of A Different Kind is dirty, dirty death metal with sick lyrics and vocals, powerful strings and thunderous drumming. The riffs are never too technical or overblown, remaining rather simplistic, but heavy at worst and downright devastating at their best. Tracks like 'Acidic Twilight Visions', 'Lord Of The Grave' and 'Phantasmal Festering' have some absolutely banging riffs, the first of which has become easily one of my favorite modern death metal songs. But, every song is drenched in disgust, complete with a putrid production that matches the nasty attitude of the music to a tee.

The vocals are dynamic, containing lows and highs and overlapping vocals at times which definitely bring more character into the music. The melodies played in songs like the aforementioned 'Phantasmal Festering' are epic while remaining sinister, and don't come across as goofy or too playful. Undeath truly does have the best of all worlds… some melody, some brutality, some groove, some technical proficiency, all without coming across as a gimmick band.

There isn't much more to say about Undeath's debut record. It's just a fuckin' damn good slab of crushing death metal that I'm sure everyone remotely familiar with modern death metal has listened to at least once. And they're actually a relatively successful band with good reason for once. They keep it pure and old school while adding a modern touch to have diehard fans of the genre coming back for me. And they're from New York, so… I of course love that!

Can “new school old school death metal” be a genre tag already? We’ve now got more bands playing OSDM revival than there were actual OSDM bands back in the 90s, and a sonic identity is beginning to form around the trend. Blood Incantation’s breakout album from last year is a good point of reference - organic, Morbid Angel/early Carcass-inspired riffs that slither around a wall of atmosphere and reverb, all pieced together with a production job meant to imitate 90s techniques, but this unflinchingly retro sub-style inevitably sounds modern due to the 25 extra years of hindsight used when recording. Put simply, there’s a more “typical” way to engineer a death metal album now, whereas back in the 90s the rulebook wasn’t out yet, leading to a lot of strange sounding mishaps - "Breeding the Spawn", anyone? - but also some genuinely alien and evil sounding stuff. Post-2010 death metal has a higher floor for quality, but also a lower ceiling - You know you’re going to get some big crunchy riffs and some filthy, cavernous atmospheres, but after long enough all the bands blend together and it’s hard to pick a standout favorite…

...well, at least until now. Their demo showed promise, but with Lesions of a Different Kind, Undeath have taken some massive steps towards the top of the new-school old-school heap. They take the deadpan seriousness of OSDM’s twisting, snaking riffs and make it fun to listen to without watering anything down in the process. Who needs hooks when you’ve got riffs?

Normally, I listen to the Vastums and Lanterns and Corpsesseds of the world and go the whole album without nodding my head to a single riff, convincing myself that the filthy, bleak atmosphere is enough to keep me interested. It’s alright when I’m in the mood, but I don’t have to put the same effort in when I listen to Undeath - the filth and bleakness is still there, but the little anti-melodies and sudden rhythmic shifts that dot the ends of these super-thick grooves have this way of giving each new verse something that makes it uniquely appealing.

The textures they’re using are familiar, with ultra low, breathy growls, churning grooves and immersive drumming comparable to OSDM revival peers Tomb Mold, Cerebral Rot, and the aforementioned Blood Incantation, but it’s how they tie everything together that makes Undeath memorable and infectious. Undeath are really good at writing “riff snakes'', which is a term I made up literally right now to describe the winding, undulating stream of riffs that constantly shifts where you expect the transition to be. One of the better examples (as well as one of the album’s standout tracks) is 'Acidic Twilight Visions' - the opening bait-and-switch from the crushing groove to the verse riff is already incredibly well done, but the real genius is evident in where the vocals come in - right in between the two riffs, creating this really neat effect where the garnish of one guitar line becomes the main part of the next. Then it snakes back with more double-kick drum in the verse...oh yeah, that’s the stuff. They don’t do cool tricks like that occasionally, either, they occur several times in each track. Undeath’s penchant for tasty chonk may turn some heads and get people interested, but it’s the tiny intricacies in the songwriting, sometimes as simple as a bend in the melody or a quarter-second pause at the end of the riff, that breathe a whole different vibe into a style that was already starting to feel like a rehash of a rehash.

Suddenly, all the media hype for this new-school old-school makes sense, when before it felt confusing and disingenuous to me. The aforementioned Blood Incantation seems to get a lot of praise for being a bit more expansive and outside-the-box than the more typical bands, but despite the clear attention to detail and commitment to a distinct atmosphere on "Hidden History of the Human Race", I came out underwhelmed on the other end. The spacey sheen in the guitars neutered the punch, and the painstaking efforts of each musician to create density and complexity make it difficult for the album to be greater than the sum of its parts. Undeath creates the exact opposite situation, where I find myself astounded at how fresh and engaging they make ordinary death metal songs sound.